COVIDIOTS at the Queens Criminal Courthouse 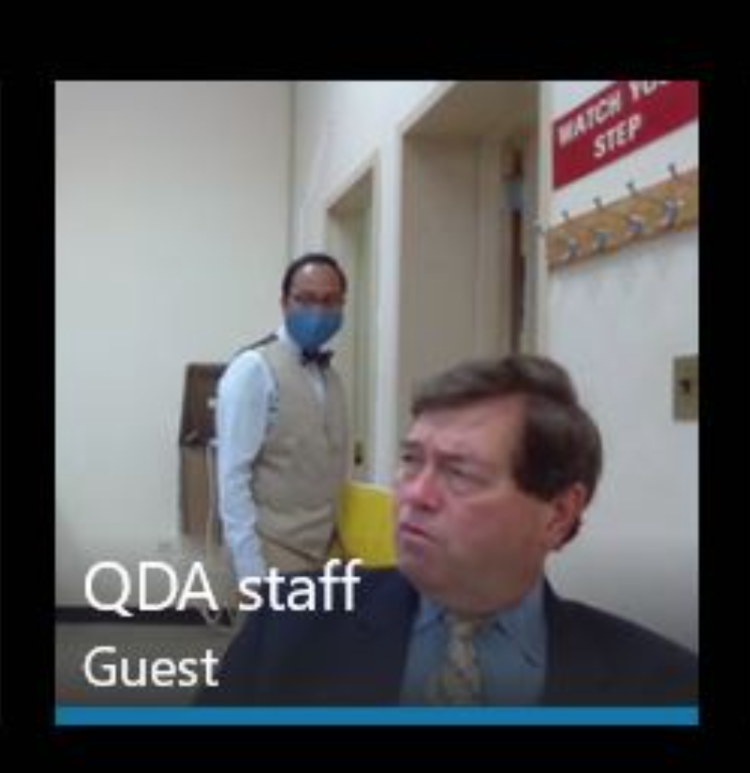 A wave of new COVID-19 cases has hit the Queens District Attorney’s Office, but that hasn’t stopped high-ranking prosecutors from ditching masks inside the Queens Criminal Court building and adjacent offices, according to staff and defense attorneys.

Screenshots of virtual court proceedings obtained by the Eagle show one top official, Criminal Court Unit Chief Kevin Fogarty, appearing maskless last month during virtual court conferences inside his office, while at least one other masked assistant district attorney stood nearby. Fogarty again appeared maskless during virtual conferences while sitting near another staffer on Nov. 17, according to an email shared among public defenders.

Another veteran prosecutor, Felony Trial Bureau Four Unit Chief Neil Gitin, has also appeared without a mask during at least two virtual proceedings, including one where a screenshot shared with the Eagle shows him talking to a person off camera.

Some Queens prosecutors say a few colleagues, particularly supervisors, have created dangerous conditions in the offices since staff returned for in-person work in mid-October.

“There are definitely employees that think masks are taking away their freedom and that COVID is a liberal conspiracy,” said one Queens prosecutor who asked to remain anonymous to speak freely about the office.

Lower-level staffers are worried about the career consequences if they complain about COVID risks in the office, according to another prosecutor who also asked to remain anonymous.

“Some ADAs are concerned about being perceived to be difficult so they just go ahead with working in unsafe conditions,” the prosecutor said.

A prosecutor in the Queens District Attorney's Office reported testing positive for the coronavirus on Tuesday, an agency spokesperson confirmed to Patch.

News of the positive test largely spread to other staffers through word of mouth rather than formal channels, alarming some who say they believed they may have been exposed to that person but weren't notified by the office, according to two defense lawyers who spoke to multiple staffers about the COVID-19 case.

"Everyone else heard by rumor and were like, 'Were you going to tell us?'" one of the lawyers told Patch.

According to the sources, who asked that their names not be used because they fear retaliation against them and the staffers who confided in them, the Queens District Attorney's Office hasn't been forthcoming when it comes to information about COVID-19 cases among its ranks, leaving some staffers nervous about their health and safety.

Included in their concerns: Queens District Attorney Melinda Katz, who tested positive for COVID-19 in March, not wearing a mask while among other staffers indoors.

I can't help but wonder why these people refuse to wear masks.

Did they try one, didn't like it, then swear it off without trying different types of masks to see which one is least annoying?

Do they not wear a mask because it forces them to smell their breath which stinks because they don't have good dental hygiene? (use an electric toothbrush people!)

Do they not wear a mask because they believe the right wing it's a hoax/no big deal/just the flu myth?

Do they still have the teenager invulnerability complex?

And to those people who fear retaliation and do nothing, you're part of the problem. If you see something wrong, do something about it, there's other jobs out there, somewhere. Get an employment lawyer on contingency or low/pro bono.

It's disappointing that the DA office has this typical BS corporate office work culture. Explains why a lot of negligence isn't prosecuted properly. They don't care about the law, just their careers and reputation and the myth of "law and order".

Elitists. The rules, the laws don't apply to them.

Must be all those Republicans Katz hired.

"Greatest threat to Democracy" = people who think for themselves and eschew the spoonfeeding from the establishment.