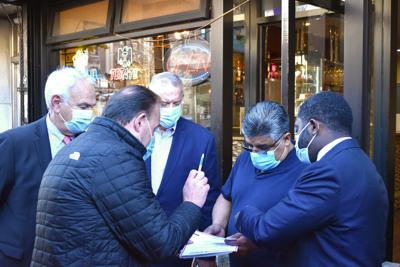 The rate of positive COVID test results has increased in Queens over the past week as officials have begun to warn that it could mark the beginning of a second wave.

After Gov. Cuomo designated Ozone Park as part of a yellow zone at the end of October, South Queens has continued to have warning signs of higher infection.

When the city Department of Health updated its website to show real-time data on COVID positivity rates by ZIP code, it showed that Richmond Hill had the second-highest seven-day COVID test positivity rates in all of New York City as of Monday, at 4.43 percent.

The increase is not isolated to Richmond Hill. Farther south, Arverne and Broad Channel had the fifth-highest seven-day positivity rate in the city. That data came to light shortly after Cuomo removed Far Rockaway’s yellow zone designation at the end of last week, based on state data.

The seven-day rolling average for the entire Queens yellow zone has increased from 2.68 percent positive Monday Nov. 2 to 3.12 percent Nov. 9, with daily rates of positivity shooting up in the last couple days of this week, according to the state data.

The relationship between small business and government during the pandemic has been an uneasy one.

“It was bad before. Now it’s worse,” said Councilman Mark Gjonaj (D-Bronx), during last Thursday’s tour of businesses on Fresh Pond Road in Glendale. “The city is not listening. They’re hearing the issues. They have not addressed the concern.”

“For us, we’re here to help small business. That’s our job,” Doris said. “While we’re the government, we’re still their advocates.”

He said about 30 walking tours have been done around the city and though some changes in policy have been implemented because of feedback, Doris acknowledged “we have to rebuild their trust, too.”

Among the problems raised by elected officials and business owners around the city are the fines being imposed, sometimes with contradicting advice from city agencies.

“I don’t like when the government descends on businesses that were closed for so long and then they start fining them instead of warning them,” Holden said.

Grech believes one person needs to oversee everything, “kind of like a COVID czar.”

Gjonaj said store owners can be fined if a customer is not wearing a mask but believes that is unfair to the owner, saying that there have been attacks on people who are demanding masks be worn.

“They’re not policemen. They’re business people,” he said. “They’re working behind the counter. They’re sweating. They’re not supposed to act as enforcement. You can’t hold them reliable. You go tell someone with mental illness that they can’t enter because they don’t have a face mask. Let’s see how far that gets you.”

It's been some time since posting here.
Today’s vocabulary word: isolate. isolates 1. to set or place apart; detach or separate so as to be alone. 2. Chemistry, Bacteriology. to obtain (a substance or microorganism) in an uncombined or pure state. ie. Since no quantified virus isolates of the 2019-nCoV are currently available, assays designed for detection of the 2019-nCoV RNA were tested with characterized stocks of in vitro transcribed full length RNA (N gene; GenBank accession: MN908947.2) of known titer (RNA copies/µL) spiked into a diluent consisting of a suspension of human A549 cells and viral transport medium (VTM) to mimic clinical specimen.

Culling the human population with deadly bioweapons and toxic vaccines: The “great reset” is medical tyranny and economic communism.

What’s the difference between God and Fauci?

This global "virus" is more low a scamdemic

It's a long Covid winter only if the sheeple allow it. All signs point to the sheeple remaining brainwashed.

What’s the difference between God and Fauci?

Good one!
But at any rate president Fauci might be finished in 2 months-only to be replaced by someone who will likely be even worse.

Anyone seen the flu virus? Last seen the end of February

Here is the "science". Fraud disguised as science.

Nothing is sacred anymore.

Hey Boredwithfascist - meet one. You boy Klaus Schwab. He gets to decide for the whole planet what is next. A true fascist.

Add the Canadian air head to this. He is the "Great Reset" man.

But at any rate president Fauci might be finished in 2 months-only to be replaced by someone who will likely be even worse.

Overrated crap. They actually said that the number of people who died DIRECTLY from was 11000 and that was back in October. The rest of the people who passed from it had previous health issues. And notice how you didn't hear anything about Covid when the Trump impeachment trials were going on. Then when they failed to impeach Trump, all of a sudden the media came out with this. Meanwhile, they allowed Chinese new year to go on and all the government officials were dancing in the streets of all the Chinatowns. Also, please explain to me why I didn't see anything in the news about massive fatalities in Flushing earlier this year? So you're telling me that between November 2019-march 2020, not one person visited china or had family members coming over from there? Also, notice how after all the "hate crimes" against the Asian community started, the government was so quick to blame it on people going on Vacation to Europe or Europeaners coming here. They say "oh the flights that were coming to ny we those from Europe". Ummmmm....its called a connecting flight you idiot governor! So all the Asian people who live in ny are just all an illusion? Give me a break!

So DJT was right. Came the warm weather and the virus went away.

Now it's cold and guess what?

Now it's cold and guess what?

what happened to Walgreens, Walmart flu shots? Just went away I guess.

get the vaccine and see what happens.