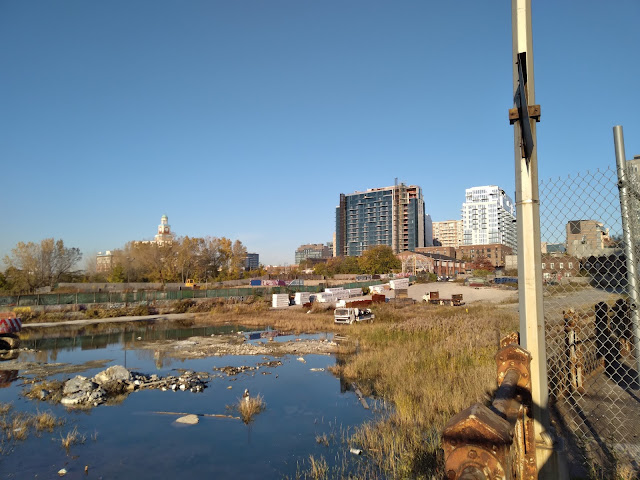 A contentious Flushing waterfront project is upending the usual City Council politics around approvals — and dividing candidates running to replace Councilmember Peter Koo, a fan of the hotel and apartment development.

The consortium, operating as FWRA LLC, aims to construct 879 hotel rooms and 1,725 residential apartments on three privately owned sites by 2025. Some 90 of the apartments in the 29-acre development would be earmarked for affordable housing.

On Tuesday afternoon, dueling sides of the fight made their voices heard on 39th Avenue in Flushing.

Outside the Queens Crossing shopping center, a project developed by F&T Group, dozens of people backing Koo held signs in Chinese and English, and shouted chants of support.

Many construction workers who are employed at F&T Group’s partially complete Tangram South condominium were in the mix, and walked in lockstep back to the construction site after the rally.

On the other side of the street, a cluster of community members and staff from Minkwon Center, a community organizing group working with low-income Korean and other area Asian residents, protested the development.

Minkwon, Chhaya CDC and the Greater Flushing Chamber of Commerce filed a lawsuit in June pressing for a full environmental impact statement for the project.

The groups maintain the creation and development of the waterfront district will drive up rents further and displace residents in a neighborhood where more than half of people are already rent-burdened.

Development of the former industrial area would be allowed under existing land use rules. But the plan currently under review by the City Council aims to tweak design details that include opening up streets within the area and new waterfront access.

A lot to the north, accounting for about 10% of the property, requires rezoning, a FWRA LLC spokesperson said.

The big problem is so many people refusing to pay for the bus. They just walk past the driver and push the paying customers out of the way and then take their seats. Scores of people come in the back door every day, Faster than the driver can close it. Still more people just put a small amount of change in there nothing even close to the faire and sit down. The other half of the people put in metro cards with no money are acting like the pain. People pay for the subway but the bus it’s a big joke. Everybody knows the enforcement is lax. If more people just pay their share. this wouldn’t even be an issue. Too many people why everything for free Too many people why everything for free in terms of city services.

Too many people why everything for free in terms of city services.

soon they realize there is no FREE.

Corrupt local politicians will welcome you with open arms, since you are loaded with money educated.

In return we ship Boredwithwhatever to China.

Win-win if you ask me.

Chicom Towers on the Canal.