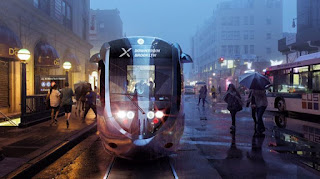 There’s not a single rail in the ground, but the mayor’s plan to create a trolley along the Brooklyn waterfront has already cost the city at least $7 million in taxpayer money, The Post has learned.

That’s the current price tag on a delayed feasibility study — spearheaded by the consulting firms KPMG and WSP — that will determine whether the controversial project is even plausible.

Economic Development Corp. officials had initially said the review would be completed in the fall of 2017, but this week they wouldn’t put a timeline on its release.
Posted by Queens Crapper at 12:19 AM

Dumblasio the progressives loves wasting tax money (by the way how progressive is gentrification?...)

From the Post article:
In April, the mayor introduced a new wrinkle into the complicated endeavor, saying for the first time that “it’s certainly going to require some federal support.”


A direct pipeline to federal funds is no problem considering that Schmuck Schumer's daughter, Jessica, is the executive director of the Friends of the BQX. What a fucking joke!

The de blasio/berlin rosen email dump, which is getting absolutely no follow up attention after they were finally released, showed how obsessed the Gentrification Industrial Complex were in getting this stupid trolley running

And to feed my ego, I said back in November that they were going to build it anyway no matter what the finding are.

So even after this expose', de Faustio and the new agents of the city along with the friends of the BQX aka enemies of the communities (which is led by Chuck Schumer's daughter) are only doing this study for obligatory reasons and are going to shape a justification for building it.

The firm hired to study the effects of the 'G' Trolley are laughing their asses all the way to the bank !!

Let the yuppies pay for their own car service. How about the hipsters paying for new sewers in Laurelton?

7 million bucks down the crapper. How may pot holes could that have filled, sidewalks repaired, litter picked up, parks refurbished?

Well we won't know will we.

A stupid idea that is a complete waste of money. You just put a ferry stop at red hook and you can get to Manhattan. Nobody wants to go from Red Hook to LIC.

We should take this out of DeBlasio's salary.

"getting this stupid trolley running, And to feed my ego,"

This over rattled, over reacting LLC dude is loosing his screws again
Remember most your hipsters and yuppies are not only capitalist but they are also crafty, ethical and mobile and can breathe new life into post-welfare- wastelands.
This leeds me to suggest they may represent some form of reincarnated frontiersman/woman or pioneer. In many ways, I think yeah. Their styling certainly harks back to the mid-to-late 19th century; to the greezy, limy colonialists and the western frontiers in travel with no showers for weeks.
Hey, I'm not to happy with them also however -they do want to earn a reasonable living, live independently without sucking off the taxpayer, and by “crafting” and “creating” To add most that dont work get money from wealthy familys back home. They cant even qualify for all this shitty mayors sec 8 handouts and free stuff because they are LEGAL white middle class Americans. Who the mayor hates the most.

Hipsters and yuppies, are like the original pioneers, explorers and artists and REMEMBER they are capitalists apposed to freeloaders for Socialism who are nothing more then parasite dropping into the city like swarms of hungry mosquitoes and rats.

Now that being said:
Would you rather a modern Trolly of people doing option A or some banana boat of people making #2

And a lot of them are just trust fund babies....mommy and daddy backing them up too.

Hey there Zoe...
this is a blog spot not a soap box for lengthy dissertations. YAWN!
Brevity is the key !

This was always a dumb idea but the diversity tax has cost us TRILLIONS.

Hipsters and yuppies are parasites and plunderers, even if the so called uber liberal ones (yes that's app service reference)

I pity you miss. Money that is pissed away in these corporate welfare deals like 421 a and J51 (talk about socialism!) which is feigned to help those struggling with affordability could go into vouchers and section 8 for the less salaried who truly keep the city and communities vibrant.

So the city has to waste even more money for a lame trolley (to go along with the expensive and shitty service water trolley the mayor induced on us, check out the lines they are getting worse) despite prior reports and even an admission by deputy mayor and fixer Alicia Glen on it's costs and countless infeasibilities

I pity you miss Zoe, You may think I have some screws loose, and sorry for being insulting but you can't even read between the lines/lies with your head on straight.

One more thing Zoe, did you at least read the progress new york link? This proposal has been craftily, creatively, and insidiously corrupt since day one.

Clearly we should all quit our day jobs and become "consultants"...

Stupid idea to begin with. They can't even run the lirr properly in the snow and they think they can run a trolley properly when it snows? What crack is mayor dumbdumb smoking?