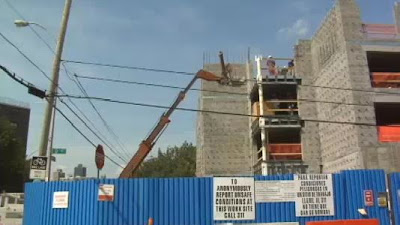 Brokers said that nearly every inch of available land in Astoria has been developed for residential use. The problem for developers, they say, is that there isn’t that much land — at least in desirable locations near the subway — left to buy. Some sources that we talked to argued that the city needs to step in and rezone the area in order to deal with the issue because Astoria is losing buyers to rival neighborhoods.
Posted by Queens Crapper at 12:25 AM

Actually, we support the rezoning of Astoria while we downzone the other 90% of Queens.

We will not bother giving the poor snuks in that part of town any heads up, advice, or help.

Your friends in Eastern Queens.

the one thing we really need, the most important thing in this toxic brew is .... the need for more people!

I grew up in and never moved from astoria. I have loved this area through the bad times and the good...

but times are now ridiculous.

me and my girl make a combined income into the 6 figures, have no children, and are considering very heavily leaving the area. Even simple small houses are now closing in on a million dollars... who the fuck can afford to live here anymore? Unless you've inherited property, you're either going to rent forever and never get ahead, or have to leave.

With all these crappy new buildings, I gotta say I don't think I'll miss this place... it doesn't look like the quiet inexpensive neighborhood I grew up.

Only in New York would people bitch, moan, and whine about an upward real estate market. Here's a news flash-- the rest of the country is, has been, and will continue to be (once they re-elect Obama) in the shitter. Get over it, sell and move on.

Nobody is bitching or whining about an upward real estate market. What people are bitching about is taxing communities that are already taxed to the max. Filling up communities with more people than they can handle is not a good thing. Neither are cheap buildings that go up with pretty much absentee owners/landlords who are only looking for a quick buck regardless of the amount of people or the kind of people that tend to go into these types of apartment buildings. So what ends up happening is more trash/litter, low class people, increased noise, increase in crimes and then eventually a lowering of property values and well.....there goes the neighborhood.