Stay off the trains at night 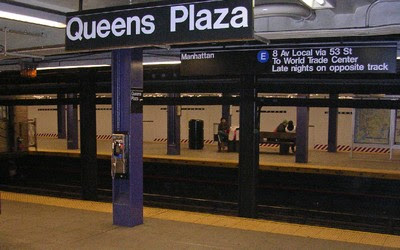 The subways of Queens are already seeing an uptick in crime - but they're about to get scarier.

An NYPD unit that patrols the borough's trains at night is on the verge of closing, the Post has learned - a move critics fear will make Queens subway travel still more dangerous.

The Queens Transit Task Force is to be shuttered on Jan. 5, with its 48 officers merged into the borough's two Transit Districts, sources said.

"Of course they say that it'll be the same manpower that way, but that's b.s.," one police source told the Post. "It's the equivalent of closing a station house."

Photo from Wikipedia
Posted by Queens Crapper at 12:16 AM

we can't even protect the citizens or provide safe reliable mass transit in what we like to think of as the greatest city in the world. sad, and makes you wonder why you would keep the current administration in power.

The New York Post failed to dig deeper by reporting who are the typical late-night train passengers.

Mostly they are minority, office cleaning staff, worn out from ultra-minimum wage backbreaking work from approx. 4-5PM until midnight or 1AM, then trudging to a subway that will require that they wait nearly an hour to arrive.

In fact, quite a few are likely to be illegal aliens, a fact well known to their employer and the Commissar.

So, these people do not matter, dead or alive.

These people never have cocktail parties at the Museum or courthouse, well guarded by taxpaid security.

No, they fall asleep on the subway, vulnerable to the Commissar's thugs.

The Commissar knows that whenever we read of the death or injury of these nobodies on a subway, the only thought we usually have is "good riddance".

Of course, there are other late-night subway riders: young people coming home from a part-time job, or late nights in the school library.

These young people also don't have cocktail parties, so, again, the Dear Leader Commissar has no use for them, either, dead or alive.

Isn't it time we rid this city of the geek Commissar Death and Taxes for life?

Or, are we too stupid? Or, are we all just as perverted as this tiny-footed, turtle-faced, tantrum-throwing, lying, carpet-bagging savage?

Next step shutting down the subway at night.