Americans competing with illegals for work 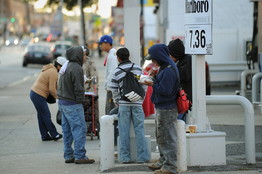 For the first time in a decade, unskilled immigrants are competing with Americans for work. And evidence is emerging that tens of thousands of Hispanic immigrants are withdrawing from the labor market as U.S. workers crowd them out of potential jobs. At least some of the foreigners are returning home.

Growers across the country are reporting that farmhands are plentiful; in fact, they are turning down potential field workers. "For the first time since 9/11, we have applicants in excess of our requirements," says Bob Gray, chief executive of Duda Farm Fresh Foods Inc., a grower, packer and shipper based in Salinas, Calif.

In particular, Mr. Gray has observed an influx of U.S.-born Latinos and other workers who previously shunned field work. "These are domestic workers who appear to be displacing immigrants," says Mr. Gray.

A similar situation has emerged in U.S. cities from New York to Los Angeles, where unemployed, nonimmigrant laborers are seeking informal work that typically has been performed by low-skilled immigrants that once commanded a 50% premium over the hourly minimum wage.

U.S. Workers Crowding Out Immigrant Laborers
Posted by Queens Crapper at 12:22 AM

In Mattituck these 2 guys (former Wall types) rang the bell wanted to rake leaves.
.........I almost choked but No Thanks.
You can’t let anybody do work on your property anymore even to cut grass (and American)

There is a problem:
People are getting so desperate !
They fall on purpose then come with a lawyer looking for a cash settlement VS sue you.
Especially all these idiots who over extended themselves with new SUVs and houses
This is a new sad trend.

I have since put up a no trespassing or peddling sign.
(I made it as aesthetic as I could)
-Joe

Could you lend me an Amero till payday?

Don't believe this. There may be a dent and a few returning home, but this place is still better than their homes.

That is what is out there. And they want to come here.

AND THEY FACE ALL BUT BOTTOMLESS PIT. UNLESS IMMIGRATION IS CONTROLLED THE FUTURE OF FAMILIES AND WAGE EARNERS IS BLEAK IN THIS COUNTRY.

Facts are not hate.

Maybe you should get used to people who are not employers, landlords, managers of tweeder programs, or running for office have an opinion, too.

"I have since put up a no trespassing or peddling sign. (I made it as aesthetic as I could)"

Rick Wingnut - Probably a guy who works in an industry that doesn't have to compete with cheap labor. Perhaps: academia, editorial writer for the Wall Street Journal, NYC politician, corporate lawyer.

Lives in the suburbs, drives to work, doesn't have to deal with the riff raff on the subway. Sends his children to private school. Votes for Obama to show his commitment to "diversity". Lives in a nearly all white enclave.

Rick Wingnut's point, if he had to have one here, is that y'all have been saying for years, quite loudly and with great confidence, that the ILLEGALS were stealing jobs from the PROPER AMERIKUNS.

But, according to this bit of news, it appears that has not been so. They were working jobs us legals didn't need. Until now. So now, as competition between ILLEGALS and PROPER AMERIKUNS begins in earnest, I anticipate much teeth-gnashing and foreigner-bashing from the Queens Crap peanut gallery. I've got my popcorn ready.

FYI:
Rick Wingnut lives in Queens, BY CHOICE, in the kind of "diverse" neighborhood you so abhor. Lotsa Eastern Europeans, lotsa Hispanics, lotsa Asians, lotsa native NYC white trash, close to public housing. Rick Wingnut has no employees and rides the subway with the "riff raff" (spoken like a true elitist, WN) just about every day.

Of course, a bona fide white liberal would NEVER EVER say anything bad about the exotic foreigners, because that would be racist.

But it's perfectly OK for white liberals to slag other white people.

That's how you earn points in the Great White Liberal Status Game.

In these hard times illegals (not immigrants)will dwindle - no work. The slack to fill positions that are not so atttractive in boom times, disappears - supply and demand takes hold here.

Maybe we shouldn't have let them in in the first place. - Well that's right except we didn't and they should sweeped off the streets and held for breaking Federal laws - National security is critical and allowing illegals to be protected by local Gov is simply mind-boggling. Remember folks - except for the Native-American indian we a nation of decendents of immigrants whom arrived to these shores the hard way - legally - like it or not!

double standards for illegal immigrants, they can break the law but American citizens better not.

if black Americans stood out on street corners in the same numbers as Mexican and south American men, the riot squad would be called out and they would be arrested. Why not arrest the illegals? they are breaking laws after all.

Because they are the shock troops sent here to destabilize and destroy working class communities.

The people that are pro illegal immigrants are wealthy who employ them and don't have to pay taxes or medical insurance.

Send all the illegal immigrants back to where they came from, let them make conditions better back home.

... using the term native NYC white trash.
Of course, a bona fide white liberal would NEVER EVER say anything bad about the exotic foreigners, because that would be racist.

You wanna know why I used the term "native NYC white trash"? Because that's what some of my neighbors are, and they cause more trouble here than any immigrants do. The guys in hoodies who hang out on their stoops all day drinking bud light out of brown bags, and then think it's funny to do fireworks between apartment buildings at 1am? Pretty sure they're native NYC white trash. The kids who walk out of a bodega and immediately throw a straw wrapper or candy bar wrapper on the ground? Native NYC white trash (okay, some of them are brown, too). The car alarms that go off at all hours and are calibrated to react to an anemic housefly? I KNOW their owners are native NYC white trash.

haha you are interesting mr. wingnut... I witness this white trash stuff all the time. Case in point. I was on Arthur Avenue in the Bronx some weeks ago and this dude in a pickup truck looked like a white guy to me just totally threw his McDonalds bag out the window and kept driving... He was clearly of white trash persuasion to me... And as far as the fireworks crap I got that in my neighborhood of Maspeth too... I can't stand it either!!!!

But as far as Americans competing with illegals for work if I were a business owner here and the applicant had papers that proved he was American born he would be the FIRST to get the job! We need to start taking care of the people in this country instead of all the others!

Oh and before anything is said I have pretty much worked at every SHIT JOB there is so don't even think about it! I have cleaned toilets, I have done manual labor on landscaping and construction, I have washed dishes, I have picked up after the elitist crowd and I could go on...

Only now in the past few years have I been able to make a good career for myself in the I.T. industry...

UNITED STATES FIRST! EVERYONE ELSE SECOND!!!