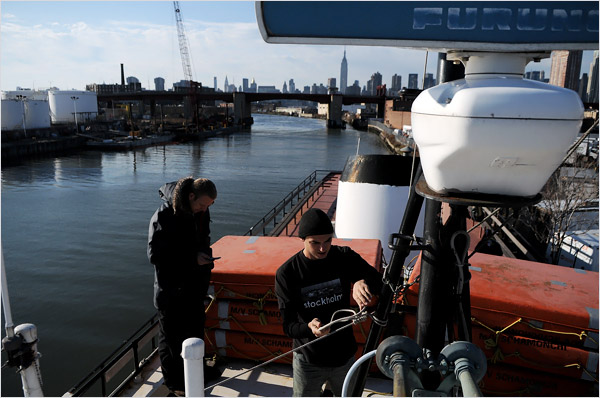 The ship is owned by a 29-year-old real estate investor named Jonathan, who spoke on the condition that his last name not be published and the precise location of the ship and its name not be mentioned because its status is legally murky. Jonathan, who lives on the ship, said it is registered as required, but, tied up to some steel pegs embedded in a concrete wall, it does not pay docking fees to a private marina or the city. He said he found the ferry on yachtworld.com and bought it in 2007 for a price he would not disclose except to say, “All of my friends spend more on their tiny studio apartments than I do on this.”

Originally, Jonathan hired workers to remove benches, with dreams of turning the ferry into a proper residence or a floating playground, complete with helipad, and of mooring it in a more proper location. But those plans were scrapped as the economy soured this summer. The ship’s five residents have a Christmas tree, a full-size refrigerator and even a drum set on the ship, but generally brush their teeth and use the toilets at local cafes and shower at friends’ apartments.

"Summer is better than winter," he said. "But even that gets too hot. And you can smell the sewage from the sewage outflow sometimes."

The Urban Pirate Life: Making a Ferry a Home in NYC

Let's see... it smells like sewage and has the Pulaski Bridge in the background. Can't imagine where this is.
Posted by Queens Crapper at 12:54 AM

THAT’S THE OLD ISLAND QUEEN!!
I know this boat as a teen (summer in Falmouth Cape Cod) I clearly recognize the bow & pilot house.
...Oh the storys I can tell them kids about that pilot house sneaking in with our girlfriends at night come 11PM when it was docked !!

It’s a twin screw all steel and gets 10 gallons per mile Diesel.
Those kids likley got it for free and I doubt they have 80+ ton Certification to operate or even insure it
That originally went between Falmouth and Oak Bluffs (summer only), then was replaced & sold to New Bedford to run off Newport (Aquidneck Island)
It about 85 feet long I dont know how the city doesnt see it

They must be freezing their butts off ! That thing is cold n drafty come September at night let alone January.

9 out of 10 reporbates agree that they must know or be related to someone that owns the property where they are tied down.

I can't say I'm surprised this fell off the government radar. CG and NYPD Harbor only seem to care about the area around lower manhattan. 108 would have no reason to really snoop around that back corner of LIC.

They're ass is going to be in a sling now though. I give them 6 months at the most before they are forced to leave. Anyone that knows anything about NYC figured out where that boat immediately upon seeing the photos.

Looks like another case of hipsters showing their stupidity again. If they didn't go giving the media a tour, they probably could have gotten away with this for much longer.

OMG
I know exactly where they are and they are gonna
die if they are living & sleeping there !

Sombody should s'plain these yahoos that aint the Des Moines River !!

2nd they are not on a bardge ! These guys are gonna get the keel glued to one of the many "glob's" of industral poisen thats lurks below. The hazmat sea tow bill is going to cost more then then that old boat.

Where they are they can see the cops coming a 3/4 mile away especially with the radar and be untied and going with no gang plank to remove.

There is only one narrow truck jammed road in. The only deli's over there I know of is one of those 12 noon "Roach Mobiles"

Yeah they must know sombody who owns that factory !!
Nobody has that much balls to do what they are bragging about 100+ feet boat in that canal

These squatters could have been carring a couple Nuke's and boatload of WMD.
Is the city and Coast Guard this dumb....yea :)

"The only way to become a real estate millionaire is to start out as a billionaire!" (Peter Schiff)

That is absolutely disgusting. The worlds largest oil spill ever happened right below them and it was never cleaned up. Not to mention the stink from the sewage treatment plant right behind the Polaski bridge in that photo. What he is saving in rent he is going to have to pay out in cancer treatments. Moron.

I know exactly where this barnacle barge is! These people are stupid if they think they are trying make a point here. Let's see health vs. making point = stupidity!

Looks like another case of hipsters showing their stupidity again. If they didn't go giving the media a tour, they probably could have gotten away with this for much longer.

My "BS Detector" is going off the charts on this story.

Considering that it's in the NY Times, there's a fair chance that these "hipsters" are well connected to someone who works for the paper. Ever wonder why you don't see many stories about normal people in the paper? It's always - "Jonathan the real estate investor", "Jimmy the aspiring actor", etc.

There's probably a reason why this is in the paper. They want to create more "buzz" for something they're trying to sell - maybe a hokey reality show about people living on a boat, a Hollywood movie about how they live on a ship near NYC, etc. etc.

These stories don't just magically appear in the Times - there's got to be an angle.

You are probably right WN... The media doesn't do anything without other motives behind it...

Lets see, a wood burning stove and open fires on the deck of a ship presumably full of diesel... sounds like a great idea.

I like my hipsters medium rare, so make sure there isn't TOO much fuel in there.

Ya just gotta live ol Crapper and the Krapper Krew.

Any journalism majors lurking out there? I hope someone is writing it all down - this could never be dreamed up in Hollywood.

I like my hipsters medium rare, so make sure there isn't TOO much fuel in there.

I laughed at loud at that one!

Best line of the day!

Ship presumably full of diesel. Yeah according to them "leaking puddles" of it.

There is no way that thing passed inspections this is a HOAX !
I smell a MTV stunt, Roxie studios is only blocks away @ 2839 Review. They must fit right in !

If you are a journalist, I hope you have a good editor.

Does anyone remember the Sea Hippies? They had an old schooner moored somewhere off the South Bronx in the late 1970's. Some guy made a killing on Wall Street, quit his job, grew a beard, wore a Viking Hat and bought a big old boat. He recruited a bunch of young men and women and they were going to sail around the world. I never found out what happened to that venture.

This guy is not a hipster per se but a real estate investor or some goofy promotion for the area,thats saying its safe for A-political yokales who will buy Hunters Point condo's with ignorance of the Newtown condition.
Complete idiots for breathing that methane and toxic pool in everyday and night if they actually live there?

I love my fat big mouth willfully uneducated zenophobic Queens white natives charred well done just like these screw ball residents of this boat may be.

I love the smell of politically correct, morally self-righteous dweebs who can't spell big words such as zenophobic [sic]
properly, when they're tied up to a skewer, and frying in napalm and a light vinaigrette sauce.

Wade
I love the smell of politically correct, morally self-righteous dweebs who can't spell big words such as zenophobic [sic]
properly, when they're tied up to a skewer, and frying in napalm and a light vinaigrette sauce.

Must have touched a cushy spot on you wade but that doesnt stop you always first having a good laugh going under the belt making violent comments.Sorry you have no morals Wade and see the world in simple ways.Xenophobic.Not a big mistake compared to people on here afraid to look up a correct spelling.Thats PC to present a statement readable i guess.

You don't understand that Wade was poking fun at these morons for creating a fire hazard aboard their floating living quarters?

You don't understand that Wade was poking fun at these morons for creating a fire hazard aboard their floating living quarters?

Yes Im aware of what he said and says.It is a fire hazard and I agreed to that.I also said it seems like more than meets the eye because there getting away with it or saying its safe to live by the biggest oil and toxic spill in the U.S.
"Jonathan the real estate investor",
Exactly

That is the M/V Schamonchi. This ferry ran between New Bedford and Vineyard Haven. This isn't the old Island Queen.