Bloomie to NYC: Salt is evil 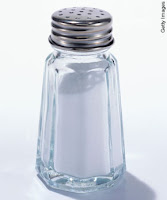 The city has come up with a plan to help you shake your salt habit, according to New York magazine.

In a closed-door gathering at Gracie Mansion late last month, health experts and food-industry representatives were told about Mayor Bloomberg's next crusade - an effort to reduce the salt in processed food by 20 percent over the next five years, the magazine reports in this week's issue.

BLOOMY TO NYC: HOLD THE SALT

(Studies have shown that salt raising blood pressure is only an issue for those who are salt sensitive, which is believed to be genetic.)
Posted by Queens Crapper at 6:25 AM

Let's all mail King Bloomberg our stool for examination so he can tell us exactly how we should alter our dietary habits.

Better yet, just drop it off by his house personally.

Notice how Der Fuhrer
is always getting on these quirky health related crusades of his
while it's actually the ever increasing high cost of living in NYC that's really endangering the big apple by KILLING off
its middle class!

More diversionary nonsense from "hizzoner" to make him look like more of a humanitarian while he's twisting the knife he's so deftly slipped through our ribs!

I wish he'd turn into a
pillar of salt!

"Let's all mail King Bloomberg our stool for examination so he can tell us exactly how we should alter our dietary habits.
Better yet, just drop it off by his house personally."

Great idea Jason! We should also add our urine so that Bloomberg can check women for Chlamydia and then he'll impose a Chlamydia tax on you of course only if you live in the "outer" boroughs.

No sex for you!

Maybe King Bloomberg should foucs his heath campaign on his bulimic girlfriend, Diana Taylor. I was the person using the bathroom after one of her many purge episodes. Really Diana, carry some spray, please.

Attention all shoppers -- buy enough canisters of Morton Salt while you can. I smell a new tax coming on. Thank God it's non-perishable. Next thing taxed will be the salt used to de-ice your sidewalks. Is there anything that this man won't tax? Please, please, please vote him out of office next year. Do it before he destroys New York City.

Unfortunately, Bloomie wants to have things "both ways" (pun intended).

He wants to continually import a foreign population with bad dietary habits, poor or little exercise, little to zero interest in education, etc. etc. And then he wants to play "nanny state" by starting these silly campaigns against using too much salt.

Why not simply start enforcing our immigration laws, and we won't have to worry about astronomical health care costs to pay for our morbidly obese "guests" from the south?

Bloomie wants to continue bringing in more "salt of the earth" into the City, yet he tells them to hold the salt? And this is the genius we need for another 4 years?

maspeth mom says...
Bloomberg should look in the mirror first. Apparently he has never heard of lead by example.
With his protrusive stomach,jowls and baggy eyes. He should start trying some of his own edicts.