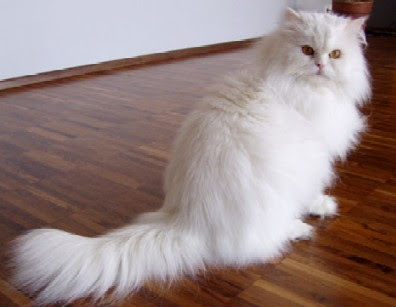 A Queens man who claimed he tripped over his fluffy cat was arrested Wednesday for stomping the feline repeatedly with cowboy boots, ASPCA officials said.

Christakis Panayi, 38, broke the jaw, three ribs and a hind leg of Atosa, his 7-month-old white Persian, on May 6, investigators said.

An investigation by ASPCA Officer Paul Lai showed that the injuries to the cat could only have resulted from an extensive beating, and Panayi later admitted his guilt, the ASPCA said.

He was charged with felony animal cruelty.

May this cretin suffer a similar fate in prison.
Posted by Queens Crapper at 5:34 AM

If only he could get a similar punishment. The animal cruelty laws in NY are pretty strong.. But unfortunately, now strong enough.

Here's to hoping that this publicity will lead to a purrrrfect home for this poor kitty.

I got this guys address. Maybe I should send some people over to his house and give him a taste of his own medicine. See how he likes it.

A living creature wether it be an animal or human should be given the same respect in life and treated as such.

Actually people like this should be dead because it's only a matter of time before they do this to a human.

He can't get a similar punishment- he's got no tail!

According to the ASPCA, he is facing some pretty strong charges. And he lives on Ditmars Blvd.

He should get 10 years in an active and neglected kitty-litter box.

At the end of that time he will understand the true meaning of "Pussy-Whipped".

Please don't presume to speak for me, especially not when you're cloaked in complete anonymity – it’s cowardly.

Perhaps I missed something but there’s nothing about these cats being used for food. They were just a sadist’s plaything. I don’t think that’s in any way legitimate.

BUT – we need to recognize that using ANY animal for meat is cruel to one degree or another. For some people that’s reason enough to go vegetarian. Me, I do love meat. I hope that everything I eat was treated humanely while it was alive and was slaughtered in such a way as to keep its fear and suffering to a minimum. But I’m not foolish enough to believe that that’s actually the case. And let’s be clear: killing anything that can feel pain is cruel, even under the best of circumstances. So I accept that I contribute to the total amount of cruelty in the world. And that’s what we all do, whether we think it all the way through or not. So if, despite that, we make the decision to eat animals the choice of animal seems to me merely a matter of taste and social convention. All other things being equal, there’s nothing that makes eating a cow more moral than eating a cat. Just ask the cows.


Interesting essay on this subject HERE.

Rigewoodian makes a great point about the animals.

I went to Italy on vacation years ago. My grandmother kept live chickens and rabbits on her farm. I watched her slaughter them. I have never been the same since. Can't eat meat.
Don't kid yourselves, these slaughterhouses are NOT humane either.

"Don't kid yourselves, these slaughterhouses are NOT humane either."

Yet we go out of our way to protect these creatures and even expand their population. Most of us believe they are beautiful and deserve to live.

Even cat will kill (and eat) mice and birds. Yet, we want to imprison anyone who would harm these little meat eaters. We even like to treat them to meats from time to time to show our affection.

Moral: Grow the hell up on this meat-eating lunacy. Meat eating is natural. And beneficial. And tasty.

Put anyone into prison for long terms (no term limits) if they harm any helpless living creature, before or after it is born.

Then, once he's cuffed and behind bars, go and enjoy a steak, a hamburger, a ham and cheese sandwich, chicken wings, tuna salad or even salmon. Gotta go. Now I'm real hungry.

Of course they’re not. They’re not human, they’re animals. As an interesting illustrative quote from the OED puts it: “It is just in man to be merciful..to be humane is human.” (Emphasis added.) Animals are not generally considered to be moral agents whereas humans are.

Personally, I love meat. Rare and bloody - YUM. Like most Americans I probably eat too much of it. (We seem to have evolved to eat it, yes, but not to eat nearly as much of it as we do.) But I recognize that the anti-carnivores probably have the better moral argument and, so long as they eat a balanced and varied diet, are probably healthier for their abstention. I eat meat despite its moral objectionability (just as people continue to drive private cars in the city, as mad and bad as that is – but that’s another discussion) and I’m comforted, if that’s the right word, by the thought that even if I were to swear it off forever and perhaps gain myself a few years of life, something else would surely kill me, eventually. That’s perhaps not the noblest position to take but at least it’s honest. To dismiss the anti-carnivores among us as infantile lunatics without even seriously considering their arguments is closedminded and morally blind.

TAXPAYER:...once he's cuffed and behind bars...

I do agree with you, this clown deserves to have the weight of the law fall down on him.

Poor cat. I agree that people who would be crewel to animals eventually move to people. This guy and many others need to be punished more than they currently are.

The fact of the matter is that a human abused and caused harm to an animal for no reason. It has nothing to do with eating meat or not, the point is there is a case of cruelty by a disregard for life. We all can sit here and politic all we want about trivial ideals.... the point is, that man did something wrong! Bottom line.... were is the compassion in this world????