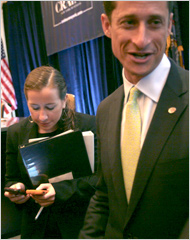 It seems as though the media has been taking part in Weiner-palooza these past few days. Here's a summary...

"New York needs to continue to grow–I'm a pro-development guy," he said, speaking at a Crain's breakfast. "If you look at downtown, you look at West Side, you look at Penn Station, you look at Ratner, you look at these things–I think that you're going to see that I'm going to be advocating. I want them to be successful, particularly in this time of slow economic growth."

Then, hitting on his favorite theme, Mr. Weiner said the middle-class does not always see a clear, tangible benefit from the projects, adding, "It does create challenges that we have to solve."

From No Land Grab:

In these tough economic times, there's nothing more important than shoveling scarce tax dollars at a basketball arena. Is it any wonder that middle-class New Yorkers — and upper- and working-class NYers, too — are having trouble seeing "a clear, tangible benefit" in that?

"The irony's going to be - I don't know if the mayor believes this - but I think probably years from now, when the mayor looks back and says, 'Who was there who did the agenda that I cared about?' I think he's going to find that I'm the kind of pro-development person [who qualifies]..."

"Integrated neighborhoods -- where individuals live, work and play in close proximity to one another, as Jane Jacobs once exalted -- demand that we enable those who want to commute without polluting to do so safely and easily."

(Funny how Jane Jacobs is brought up when it suits Anthony's purposes. She would have looked at the Atlantic Yards plan and flipped out.)

Mr. Weiner has presided over more turnover than any other member of the New York House delegation in the last six years, according to an analysis of Congressional data. Roughly half of Mr. Weiner’s current staff has been on board for less than a year. Since early 2007, he has had three chiefs of staff.

Mr. Weiner’s actions as a boss of 20 or so employees, representing almost 700,000 people, offer clues about how he might handle perhaps 300,000 city workers, with eight million constituents.

From the Daily Politics:

A sharp-eyed reader spotted not one, but TWO typos (so far) in Weiner's middle-class manifesto, "Keys to the City" speech, which he delivered yesterday at the Crain's breakfast...Hopefully, no heads roll over this. Weiner spokesman John Collins had no comment.
Posted by Queens Crapper at 12:29 AM

Hes cut from the same cloth as Bloomberg.Corporate welfare and skimming off the tax payers to send money to new illegal settlements in Israel. I cant wait to bike to my 7 dollar an hr concessions job at a west side development stadium\convention hole because 3 dollars a ride each way on the subway will be too much on my income.It is now.

He is 100% differant from Bloomberg and he is a great man.
He will be a mayor from the outer boruoghs who beleives in what we beleive in - not some rich snob.
Stop being biased Crapper, you conservative lapdog!!

Weiner has been on the government welfare rolls all his life. Before being elected to the City Council he worked for Schumer. In 1998 he was elected to Congress. Anthony has never had a real job. He has no feeling for anyone including his employees. He is a spin machine who will say anything to get elected.

"He is 100% differant from Bloomberg and he is a great man.
He will be a mayor from the outer boruoghs who beleives in what we beleive in - not some rich snob."

Anthony Weiner had nothing but praise for Mayor Bloomberg yesterday, so they may be more alike than you care to admit. He will definitely look out for us, but only after he looks out for the needs of fashion models and the likes of Bruce Ratner who donate thousands of dollars to his campaign.

Isn't this the same guy who went on a cursing tirade at a synagogue some years back?

In a moment that went far beyond the usual frank dialogue among politicians, the Brooklyn congressman publicly laced into a fellow Democrat - using language that would make a sailor blush.

"Do you have a f------ problem with me?" the 2005 mayoral candidate said to state Sen. Carl Kruger at an annual Mill Basin fund-raiser Thursday night, witnesses said.

"I'm going to give you a bad hair day," Kruger shot back, apparently vowing revenge.

The exchange, which occurred in the lobby of Temple Shalom, was prompted by Weiner's fierce opposition to acting legend Paul Newman's proposal to bring Grand Prix-style racing to Brooklyn.

"They were screaming at each other. It got very close, chest to chest and nose to nose," said one shocked observer.

But what apparently annoyed Weiner was an earlier incident during an April 21 briefing on the Champ car project by Newman himself.

At that briefing at the Brooklyn Marriott, witnesses said Kruger tore into a young Weiner staffer in front of the roomful of honchos after he conveyed Weiner's objections to the project.

"It was totally inappropriate. He was just a kid and Kruger started screaming at him in front of everyone," said a local pol who was at that meeting.

"Weiner was just giving it back to Kruger. If he did it to a member of my staff I wouldn't have waited a week," quipped the pol.

Weiner acknowledged he blew a fuse at the 41st Assembly District Democratic Club dinner, but stressed that it was over his staffer's treatment by Kruger.

"The conversation I had with Sen. Kruger, I'm sure made it very clear to him that I will not tolerate him abusing my staff," said Weiner.

"I don't recall using any profanity. However if the language was too salty for some ears I regret that."

Kruger said he was "shocked" by the outburst and said that at the previous meeting he was just trying to send a clear message to Weiner through his staffer. "His temper is a known fact, but to act as he did in a temple in front of a host of community leaders, I thought was very inappropriate."

One attendee at the dinner acknowledged that staffers "had to close the door to the banquet room because the dinner was going on and everybody could hear it."

When Weiner ran for mayor last year, his mother, a retired public schoolteacher, occasionally appeared with him - making headlines once when she publicly corrected her son during an education speech.

"Weiner is showing he can't be pushed around and that's a fine thing, but Kruger ... tries to settle all scores behind the scenes," Sheinkopf said. "That's the way politics works in that part of Brooklyn."

"The conversation I had with Sen. Kruger, I'm sure made it very clear to him that I will not tolerate him abusing my staff," said Weiner. "Only I am allowed to abuse my staff!"

Why does anyone in this city believe that ANY pol is going to look out for what's in the people's best interests instead of their own? WAKE UP PEOPLE.

A phoney windbag, like all other politicians. Begging the fashion industry to throw him some bucks if he proposes a new law--- what a creep. What have you done for your constituents lately??????

So whats wrong with that? He was pissed at some guy who wanted to build a "Grand Prix raceway" in Brooklyn. Good for Weiner.

He's still a jerk, but I dislike him a little less for getting in Carl Kruger's face -- and opposing the silly racing idea. Shame on Paul Newman - he ought to know better.

Shame on Weiner for making a confrontational scene at a religious institution.

To me he is cut from the same cloth as Bloomberg and I do not consider either of them great men. It is so disturbing that we are constantly making concessions for corporations at the expense of the average citizen. We elect individuals with this mind set and they continue to vote against our best interest. That is why we are so screwed up!

The central point here is that this wannabe believes that you own your property only until some developer puts up money to persuade a politician (for example, Weiner - like the Commissar) that he needs it more than you do. Eminent domain. Land theft.

So what if you've had the property in the family going on to a hundred years or more, with hopes that your great, great grandchildren and their progeny will continue to own it - either as a residence or business?

When a wealthy developer has desires for what is yours, just go shit in your hat says Weiner and his mentor, the Commissar.

They want your property, go live under a bridge. That's what welfare is for, and, it's high time you were knocked off your selfish throne where you deny the less fortunate of needed shelter, food and your income.

Weiner never made it private business and has spent a lifetime as a professional politician.

This guy is VERY dangerous. His office does nothing.

He just moves from one headline to another but never solves any issue.

He'll be much worse for Queens than Bloomberg has been. Mark my words.