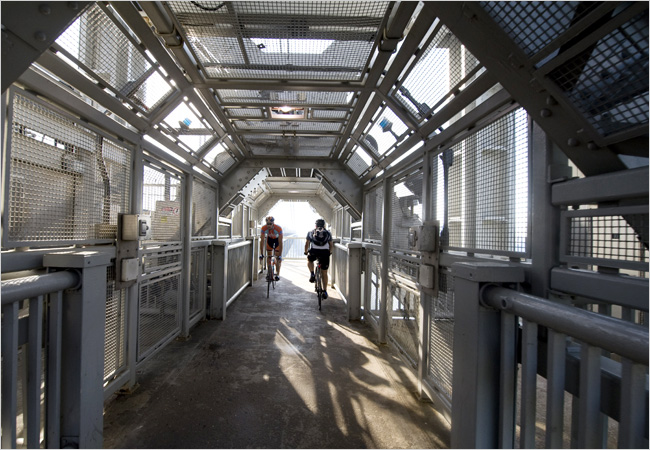 As the heat rose outside the Home Depot in West Hempstead on Long Island, small groups of day laborers gathered under short trees alongside the parking lot. Here and there, heavily used mountain bikes were locked up; their owners had already found work. Jorge, who said he came to the United States from Guatemala 20 years ago, was among three dozen men still waiting for a nod from a contractor, and he leaned on a bike he said he had borrowed from a friend.

“The gas — it’s too expensive to use a car — you got to use a bicycle,” said Jorge, who would give only his first name. “We do this because we don’t have a lot of money. A lot of people do this here.”

Bike commuting takes on a greatly different aspect in this dusty parking lot. No one talks about green living or exercise. There are no showers and no bike racks. The only place to clean up is at a spigot on the side of an empty house nearby, and to lock up, the trees.

“Overwhelmingly, Hispanics are more likely to bike to work,” said David Mejias, a Democratic Nassau County legislator from North Massapequa, “and they overwhelmingly make up the fatalities.

“They are going to work at odd times, coming home at night from working in restaurants and bars,” he added, “and they have no reflective gear, no helmets.”

Seems like bike advocates should be doing aggressive outreach in Hispanic communities since members of the Hispanic population are more frequently injured or killed in bike accidents due to their lack of safety equipment and knowledge of NYS traffic regulations concerning bikes. This would have a tremendous impact on the numbers of fatalities and accidents in NYC and NYS.
Posted by Queens Crapper at 12:15 AM

Sadly, I've read comments on their blogs that "Mexicans on bikes are not real bikers." (And they call us Archie Bunkers...)

Making connections where they dont exist again crappperrr? What a surprise.Wrong again with the stereotyping.One dumb ass doesnt speak for all bikers there buddie.What a laugh this blog gives me.

"One dumb ass doesnt speak for all bikers there buddie."

Archie Bunkers don't speak for all of Queens, but you bike dudes have no problem insinuating that they do.

This is the absolute bottom story of the day! The NY Times writers must have a lot of time on their hands if they're worried about racial disparities in bicycle accident rates. Perhaps they should stick to their incessant puff pieces and cheerleading about Obama.

Reminds me of the old joke about how various newspapers would write a story about the end of the world:

They should also circulate the memo to their brethren that drinking and driving don't mix in this country either.

Its easy to follow the rules of the road here.Just look for the large car or SUV that doesnt stop at 4 way intersections and watch like a hawk for overweight sloppy drivers running stop signs on their cell phones.Note to Q.crapper drivers.They are red,and say stop in big letter's.Even stopping for 5 seconds would be nice.But public schools around here must be top notch as is evident by this blog.By the way theres Hispanic bike messengers in Manhattan that are part of that community.

The problem is that the newcomers don't understand the rules of the road and don't wear reflective equipment because they are spending their money on things like food. I am anxiously awaiting the outreach campaign by Transportation Alternatives about this issue. Strangely, Streetsblog hasn't covered it yet.

Don't hold your breath. Those 2 groups are busy trying to get a bike lane on Queens Blvd, which is the last place they should have one. There are multiple subway lines running down that corridor to get them where they need to go.

No bikers I know even like walking across Queens Death blvd.Thats a bad idea to even drive down that.Ive only seen the lycra wearing expensive carbon road bikers riding down that rocky death blvd.Queens blvd is all yours folks.No thank you.Watch out pedestrians as always.