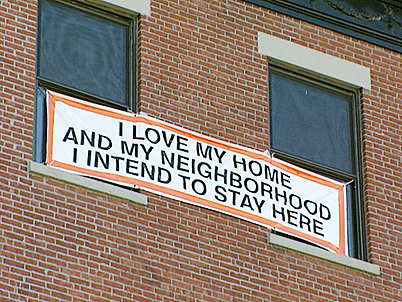 Brooklyn Matters is a documentary that chronicles the struggle of people to save their neighborhood from the Atlantic Yards project. The film will be screened at several locations over the next month. Crappy encourages you to watch. Hopefully the film will make its way across the border soon. Heck, maybe we'll even sponsor it!

There's also a "Laugh, Don't Destroy" comedy benefit for DDDB's legal fund scheduled for February 6th in Park Slope. These are real Brooklynites. The kind that dig their heels in and fight. They aren't lame-ass poseurs like Marty Markowitz. (Oy vey, Marty, your shtick has worn itself out!)

God bless those people. I wish they lived in Queens.

Now that's what I call putting creative thinking into effective action! I wish we could see similar from the dusty archival minds at some of the "hysterical societies" that are supposed to be protecting Queens architectural heritage! Way to go Brooklyn!