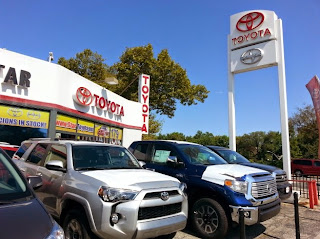 Community Board 11 unanimously refused to renew a zoning variance that allowed a Bayside Toyota dealership to operate in a residential area after neighbors complained.

Star Toyota and Scion has been operating on Northern Boulevard for 40 years with the variance, but locals want the dealership gone for being, according to one board member, a “bad neighbor.”

“The community wants them removed because they don’t respect us,” said board member Steven Behar. “It’s as simple as that.”

Residents complained that the dealership parked their cars on residential streets and illegally dumped garbage in the neighborhood.

As a requirement of the variance, the dealership must meet with the community board every 10 years so their business can be reviewed.

After reviewing the business this time, the board decided to act on the complaints and vote down the renewal.

There are two more steps in the process: Borough President Melinda Katz is expected to announce a decision on Sept. 18 and, if she supports the community board’s decision, the Board of Standards and Appeals will make a final decision.

Actually, the BSA makes the final decision regardless of what Katz decides.
Posted by Queens Crapper at 12:51 AM

this location is actually a business the community should be rallying against... not the utopia realty place. Make sure everyone on here calls Katz and let her know to decline their variance.

Aren't these the same folks that had Halloran hollerin'?

They should change the Company name to TNP trucking inc or Dana construction inc
nobody can bother them.

Actually Anonymous 1, the community did not rally against the owner of Utopia Realty.

No one said a bad word about the owner at the CB7 meeting. No one accused him is being a bad neighbor.
As a matter everyone recognized that for 30 years his variance had been renewed because in fact he was a good neighbor.

The issue was that the owner wanted the variance "CHANGED" and the community did not.

As you see now a variance like that is a community's only protection against a bad neighbor so no change for Utopia Realty, not a rally against him.

It's nice to see a community board with balls.

A meeting should be arranged by the local pols between the dealership and the local residents addressing the complaints and a solution should be found that will be reviewed quarterly by an ombudsman appointed by the CB and locals. If they receive a bad review two quarters in succession then they should have the variance rescinded.

This business provides jobs and pays taxes. A sharp smack to the head should be enough to wise them up to their wrongs. If not let them hit the road.

BSA is pro developers and when the right lawyer (one with connections with BSA members) submits the variance, BSA grants it. Almost always.

Read between the lines people. One of the protesters who sits on the board is in bed with developers who want to build a residential complex there. The neighbors may be getting more than they bargained for if the car dealership goes.

How did they go about doing this?

We have so many nuisance businesses in Queens!

Meetings with the owner have been held in numerous politicians offices and police precincts over the years. The Koufakis family has no intention of complying with any standards at any of their locations and to date no one has made them, though Halloran came close and Assemblyman Braunstein has made an impact at the service centers too. If moved from this location they would not go far, hopefully just far enough to move the service center too.

"Build a residential complex"
There right on the Clearview and NB with all the noise and fumes ! More fedders crap comming our way ...

sadly, the c.p.b. 11 with balls is impotent, just like the city council (all prog/Marxist controlled nyc gov.)

a communist ,sympathizer red diaper baby), who like his fellow traveling parents in the 1940's lost their secret classification working for the U.S. gov.