Astoria Pool "Theater" to be crapper-less 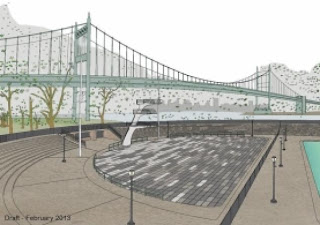 An ambitious project to transform a defunct Astoria Park diving pool into an amphitheater could begin in 18 months, with a pricetag more than four times originally envisioned.

The long-neglected pool will be paved with concrete to create a 37,000-square-foot performance space that will hold 500 people, Parks Department officials said Wednesday at a community board meeting.

When the project was initially unveiled in December 2011, its pricetag was estimated at $1 million, with hopes that shovels would be in the ground by 2012.

Despite the quadrupled pricetag, there won’t be enough money to create permanent bathrooms there initially — a fact that concerned some stakeholders.

Parks Department officials said they would instead provide portable bathrooms in the interim due to a tight budget.
Posted by Queens Crapper at 12:16 AM

What do you mean? There is plenty of crap. THEVALLONES!

Pee in the pool.
Isn't that what such public facilities are for?

So whats the big deal Crappy?

If you don't mention that the theater has a brick floor making it unsuitable for dance, is 40 feet from an open pool, has only about 1/3 of its seating that actually faces the stage, will be outdoors with no covering for shade or protection for rain, will be seasonal in use for only part of the year, and features a local theater workshop that provides stellar performances of local kids and the elderly, who will say anything?

Well that is not completely true.

The tiny group of a few dozen were overwhelming for this travesty and waste of public money.

When we think of funds needed for Flushing Meadow, the East River seawall, the Rockaways, and hell, just about every park in Queens, and $4 million is found for what will be little more than a lounge full of cement, what CAN we say?

Peter will get this and it will sit there unused after the first hip-hop concert played at the 'stage' will blast the community.

The rest of you need to remind him of this when he is campaigning in your district for Beep. But make sure you do it in your rundown neighborhood park.

who is going to protect normal people from the animals from the projects who will overload the pool?

That's ok.
All them future Democrat immigrants pee & crap in the pool like it the Rio Grand or the EMCP Unisphere

The reason I haven't been in a public pool since some 1977 night event I vaguely with a girlfriend Fran who went to Grover Cleavland highschool.

this is not an issue of 'animals' from the projects - if Queens residents deal with civic issues by toilet humor or always talking like Archie Bunkers don't be surprised if everyone treats you - and has the same regard for you - as Archie Bunkers.

The question is this: everyone is bellyaching about how services suck in Queens, and in particular, how your parks look like hell and get no funding.

Now we have an egregious waste of money with a 400% cost overrun - something that is aided and abetted by a tiny vocal minority within a Vallonia, and no one can comment on the lack of suitability of this as a cultural venue - by any stretch of the imagination - or to say anything that they will, by every indication, toss away yet more millions at it.

Think about this the next time the Republicans talk about government waste. This is real money, folks. Millions in taxes rung out of your labor and hard work.

But it gets better.

The man behind this, this sophisticated cultural 'maven', is making a serious run for beep. He has lots of money behind him.

Do not be surprised if he gets in and if he does, remember this post and your 'animals in the projects' as he starts to work his magic in your community and its parks.

You get what you deserve.

when he starts to campaign in your community, ask him about this project.