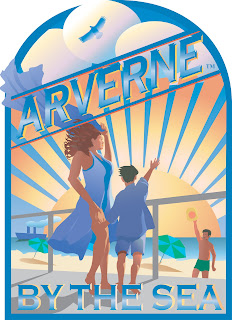 Remember all the fanfare 6 years ago over Arverne by the Sea, how it was supposed to transform Far Rockaway from the area full of crap that the city created over the past half century or so into a desirable, middle class community? Part of the plan back then was for a 30,000 sq ft YMCA.

The plans for the YMCA call for the construction of a brand new 30,000-sq. foot, two-story building that will have supporting programs and services for 10,000 people. The YMCA plans to offer after school programs and youth sports, including extensive swim instruction and lifeguard training - both firsts for this beach neighborhood. In addition, more than 65,000 square feet of open space will be developed to accommodate the expected expansion of the facility as the community continues to grow. The new YMCA will employ approximately 30 full time employees and 125 part time employees.

Going Coastal reported in 2008 that work was about to start on the Y after the search for an additional $5M to build a bigger facility was halted.

In 2009, the following was published in the Wave:

Work began in earnest last week on the longawaited Arverne YMCA, which is being built at Beach 73 Street and Rockaway Beach Boulevard, in the Arverne By The Sea development. Officials say that they hope to have all the piles driven and the building's foundation mapped out before the ground becomes too hard to work in. Then, the builders will come back in the spring to begin the construction process that should take a little more than a year.

That never happened, either.

In 2010, the Daily News reported that additional funding had been found, but that the cost of the project now required the building to be LEED certified, which would have further delayed construction.

Original plans were for a 30,000-square-foot community center. But after about three years of back-and-forth between the community and developers, the YMCA will now cost about $25 million and include two pools and a basketball court, Romski said.

"We're tired of the possibility. We want a reality," said Councilman James Sanders (D-Far Rockaway), who secured the $1.87 million that triggered Local Law 86.

But the city granted a waiver for the project allowing it to proceed. It didn't. A long-promised supermarket finally opened, though.

Melville-based Racanelli Construction Co. has been picked to build a new 36,600-square-foot YMCA complex at Arverne by the Sea in Queens.

Racanelli’s won the project with a bid of $17.35 million, according to a company statement.

The facility will include an indoor swimming pool, locker rooms, conference rooms, multi-purpose rooms and gymnasium, as well as fitness, exercise and aerobic rooms.

Which conflicts with the statement currently on the YMCA's own page:

The project is scheduled to be complete by June 2013. 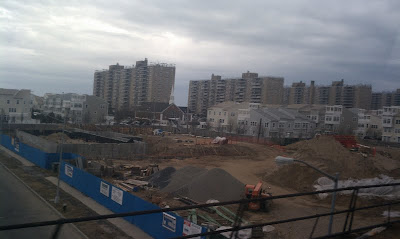 What is the over/under for this actually being built, on time and without another drastic cost increase?
Posted by Queens Crapper at 12:21 AM

Ah! But what shall he call him? Some people dont take kindly to insults!

Why is the city building a YMCA and not the YMCA organization? If Bloomturd wants a facility like that there, why didn't he propose a rec center like the one in Flushing? YMCA is a religious (although open to all walks), non-US based organization.

If you haven't been there in a while you should check it out…it looks amazing. I was there a few weeks ago. They are selling the last neighborhood of 2 family homes. You can still see active construction. The Stop and Shop supermarket opened last year. They also have stores that just opened in the Retail Plaza that was just built next to the Beach 67th train stop. I was also told the Y which they are now building will have 2 pools, so it will be worth the wait.

The delay was caused by the Community not the YMCA or the Developer. THe community fought for and won an extra pool and a enclosed gym

There is a different developer doing the project. That's a big part of it.

within walking distance you got yourself a gang banger's crack house. see the pit bulls. hear the loud rap noise.

This is not a safe place to live or raise a family.
Gangs, drugs, guns are everywhere.
Alo, Why build such a community at the foot of the ocean? Anyone ever think of what would happen to these shabbily built units if a hurricane came to town???

I bought at Arverne By The Sea over 4 years ago, and have never had a problem living here. Hurricane Irene came to town a few months back and my family and I felt very safe in our home. We have not had any issues with crime & we really enjoy living here. ABTS is changing the area, if you haven’t been here for a while come check it out. We can meet at that new subway sandwich shop they just built.

is there a possibility that the hi-rise buildings will one day join the group of IMPLODED PROJECTS ,that we all have viewed on tv ,around the U.S. ?

or do the inhabitants actually own the living spaces ?

Arverne By The Sea is mostly low-rise houses. Many of the high-rises in the Rockaways (the Daytons, etc.) were built by Robert Moses in his waning days of power.

I find it funny to read two posts (2/28 & 2/29) which sounds like he/she is part of the Arverne sales team. Stores open? Besides a bank at the corner, there's nothing else. Meet at the sandwich shop? Come on now, the surrounding retail center are all empty and pathetic. Let's not try to sell more empty promises. People have been waiting for the promised YMCA for over 5 years and crime is rising in the area.