Bayside Cemetery: It's a jungle in there! 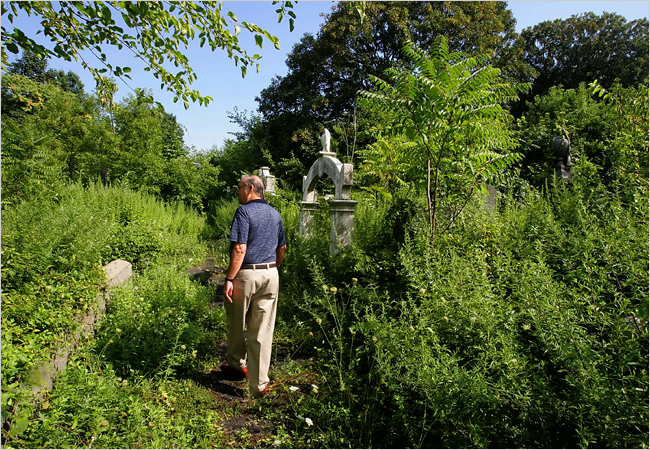 Five years ago, several hundred members of the Church of Jesus Christ of Latter-day Saints and six funeral directors arrived at Bayside Cemetery in Ozone Park, Queens, to take part in an ambitious project. For four days, the Mormon volunteers hacked at impossibly long skeins of ivy and thick patches of weed amid debris scattered across one of the state’s oldest Jewish cemeteries, which has been there since 1865 and is home to about 35,000 graves. The funeral directors continued to work on the grounds for months after.

But eventually the volunteers left, in part, some of them said, because they sensed a lack of interest from Congregation Shaare Zedek, the Upper West Side synagogue that owns a small part of the cemetery.

Now the weeds have returned. And whereas Emerson described a weed as “a plant whose virtues have not yet been discovered,” these weeds have inspired a class-action lawsuit.

More about the suit in the Daily News.

And there's a film in the works about this: Ashes to Ashes

In Judaism the cemetery is one of the most important symbols of the heritage and a lasting memorial to those that have come before us. It is the responsibility of every Jewish person to remember those that have past on and to provide a safe place for them to spend eternity. The Bayside Cemetery in Ozone Park, New York is proof that the Jewish community has neglected its responsibility.

This film is about how one of the oldest Jewish cemeteries, in the largest Jewish community in the world, has been forgotten and how it took a Mormon from Utah and an Italian funeral director from Queens to restore the beauty that once was.
Posted by Queens Crapper at 12:51 AM

This comment is directed to the Bayside Cemetery filmmakers, not Queens Crap.

Gimme a fucking break, please. Like the Mormons are saintly or-- this is key-- a disinterested party when it comes to...

I don't have time to get into it but I'm sure at least at least a few QC readers familiar with both faiths know what I'm referring to.

As for the condition of the cemetery... dead is fucking dead, and the "sanctity" of burial grounds is hardly universal. Even if the cemetary owners are shirking some maintenance, what of the hundreds of thousands of RELATIVES of the dead, at least some of whom are still in NYC?

Face it, they don't give a shit either, and it's NOT just in Bayside Cemetery.

This isn't but it is hardly a scandal to compare all that effects the living so from one Queens native to a Utah Mormon, spare us the phony tears.

Although the illegal dumping at Bayside is maddening, the natural reclamation of the land is, I think, more beautiful than what the place would look like after a work crew of 5' tall Ecuadorians got done with it.

Like the modern-day Brinckerhoffs, the family members of those buried at Bayside Cemetery are nowhere to be seen. Shame on our society! Not only do we neglect our elders, but we also desecrate the remains of our dead, too.

My family visits my grandfather's grave at Mount Hebron Cemetery every few months. When needed, we wipe clean the monument, and cut the weeds around it. Most Americans are so lazy, they rely on others do do what they take for granted.

This is part and parcel of modern American culture.

The old is past, the new is great. All hail McDonalds and Disney!

Funny, if this was trashed by the Nazis documentaries would be made and it would become a world historic site and ...

So what happens when an area gets trashed by the neglect of its own community?

We talk about something else.

For those free-lance critics voicing vulgar, profane and otherwise defaming opinions about concerned Western citizens interested in making a difference, in a cemetery they have no vested interest in, (chesed shel emet) it was sure nice to see your efforts and money inside the cemetery when the work was taking place.
Where were you?

Limited minds speak louder than words, for the compassion one has in burying thier own, adds respect to anyone's ancestors burial locations. Everyone is limited in economic resources when it comes from one's own pockets, at the expense of putting food on the table for thier wife and children.

Comments about "stalking" opens areanas to further discussion and enlightenment, should the anonymous wish to openly dialogue on this topic. Please be honest and disclose your true identity, position and lack of understanding. We all continue to grow and live - on both sides of the veil.

Where do we go from here?

From the information Ms Weiner published in the Jewish Week, 2003, someone was to be preparing a database for interested family memebers - to locate thier ancestors. Are you truely interested in its progress? What do you know about the efforts in that direction? Are you willing to chip in?