So many developments, so few supermarkets 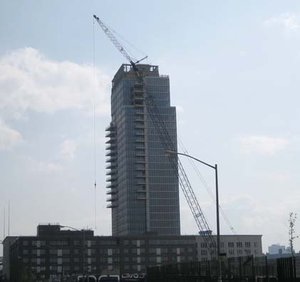 Neighborhood supermarkets are a vanishing breed in New York City, and developers are having a tough time wooing them back.

A third of the city's supermarkets have closed over the past five years, many torn down for new construction, according to a recent Department of City Planning study, which declared a citywide shortage of at least 100 stores. Elected officials have called the problem a crisis.

Yet they continue to upzone neighborhoods and rubber stamp mega developments anyway. Great job. So glad you voted yourselves a raise.
Posted by Queens Crapper at 12:43 AM

Foreign money does not eat or shop.

All it needs is a cash flow for the mortage, then a tax shelter to protect it from giving something back to the community (outside of campaign donations)

Considering these buildings will be soon filled with guest workers putting in 12 hours a day, all they need are bodegas for that late night Corona.

Who needs supermarkets when there is FreshDirect? At least the new LIC has a farmers market as an alternative.

How about schools and hospitals? Even if they build schools they will still be overcrowded and hospitals, well its a 'short ride' across the bridge in traffic.

Its a bit like living on Roosevelt Island. You have one so so place to every need.

Great deal for the money, dont you think?

Who needs supermarkets when there is FreshDirect? At least the new LIC has a farmers market as an alternative.

Most people like to look at and select their food. Also, a lot of older people do not use computers. Farmers markets only sell vegetables and fruits.