Some progress made by abandoned house dumping ground in Jamaica 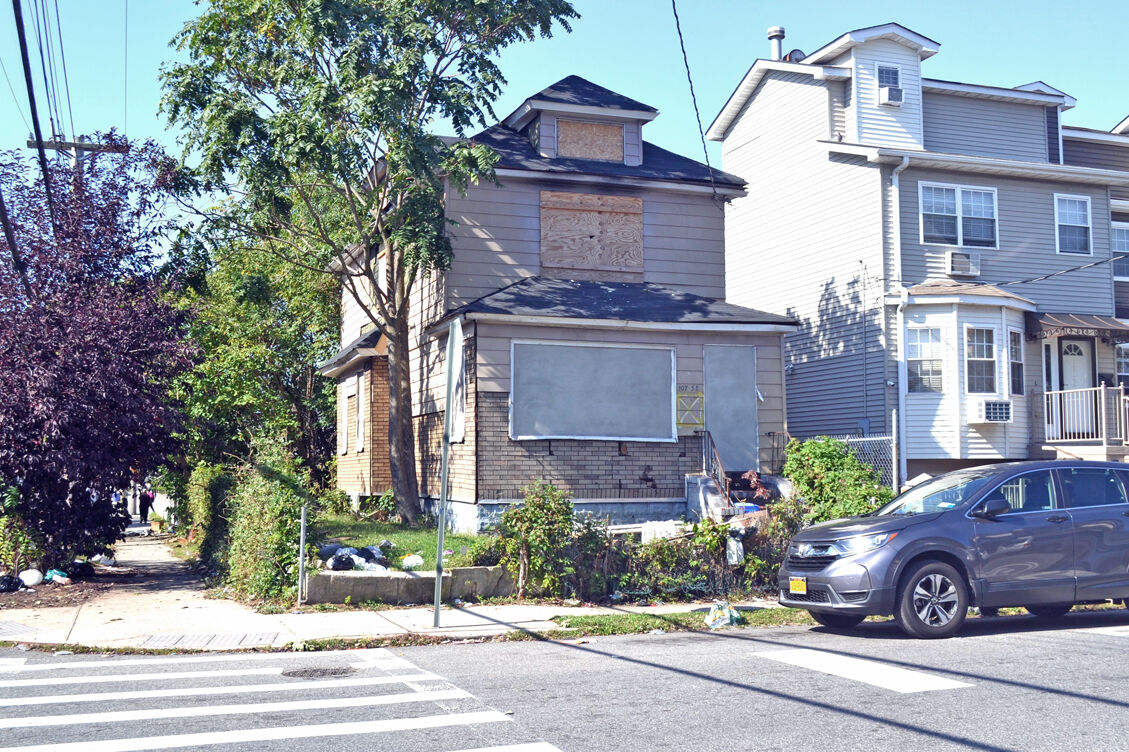 Within days of the Chronicle paying another visit to one of Jamaica’s more infamous eyesore properties, there was some limited action taken on behalf of neighbors who have been living with the abandoned house and frequent dumping ground for nearly nine years.

But just how long the corner property and its boarded-up house at 107-58 164 St. will remain clean or if the city will take any further action remains to be seen.

“There was cleanup,” neighborhood advocate Pamela Hazel said in a telephone interview on Tuesday. “They cleaned the yard. A big red couch I saw last time I went by was gone. I hope it stays that way.”

The Chronicle on Oct. 1 took several photos of the property. Trash was strewn throughout the front yard, as per usual. The seemingly omnipresent pile of dumped trash and debris in the backyard also was there, though the red couch, tree limbs and brush were a different and larger pile than the Chronicle photographed back in June.

While the building is under a full vacate order following a fire last winter, clean, sharp holes have since been cut in some window boards and walls, cuts that from the sidewalk appeared to be sharp and precise enough to have been made by hand or power tools.

The paper last week forwarded the photos, along with others from June, from November 2016 and from 2013, to the city’s Departments of Buildings, Health and Mental Hygiene, Law and Environmental Protection seeking comment as to what possibly might be done to find a permanent solution.

The Department of Buildings, where records show complaints about the property were first filed in 2012, said in an email Tuesday that inspectors had visited he property since Friday.

“Our inspectors did find excessive debris in the yard of the property, and a short garden wall around the property that was in a state of disrepair,” the email said. “As a result we issued two violations to the property owner for failure to properly maintain the property.”

City tax records list the owner of the property as Resource Capital Group LLC with an address of 99 Wall St. in Manhattan.

It's quite an accomplishment to stand out as a dump in a neighborhood that can be described as one.

Doesn't seem to be a housing shortage, here is what is many of abandoned homes for years. There is an shortage of accountability, good public servants and a non-corrupt government. What do you folks in NYC actually get for your high taxes, because everything there is shitty from roads to subway and shit like this.

ALAS, Jamaica itself is a toxic dump site (politically and otherwise). It also reveals how the (mostly) Black leadership has monstrously failed their respective communities, neighborhoods, people and responsibilities, with impunity. That would be Leroy Comrie, Floyd Flake (his name says it all), former, disgraced New York State Senator Shirley Huntley (who was indicted, prosecuted and incarcerated), and the greatest emotional vampire AND tired vulture of ALL, Gregory Meeks (men have been hanged for LESS). They are ALL GUILTY of a dereliction of public duty, a betrayal of public trust and a flagrant violation of the public oaths of office that these voracious, predatory, rapacious and self-serving thieves have mendaciously sworn to uphold.

Now, if I left any of the failed, Black-sploitation leaders' names out, forgive my addled mind (their politically failed records read like a police blotter).

WORSE, the entire borough of QUEENS County is a cultural, humanitarian, ecological, fiscal political, and spiritually failed wasteland. How ironic, then, that this great, bucholic and verdant borough was once known as 'The Borough of Cemeteries,' and now it's a massive graveyard of epic government fail!

And, the public be damned (again and STILL)! What? THIS IS NEW???

❝It is no measure of health to be well adjusted to a profoundly sick society.❞ ――Jiddu Krishnamurti

❝They got you fightin' white against colored, native against foreign, hollow against hollow, when you know there ain't but two sides in this world: Them that work and them that don't. You work, they don't. That's all you got to know about the enemy.❞ ——Joe Kennehan (Chris Cooper), in John Sayles’ ‘Marewan’

❝ ... most men and women will grow up to love their servitude and will never dream of revolution.❞ ——Aldous Huxley, 'Brave New World'

❝The problem is not only liberals who are not liberal; it is also conservatives who are not conservative. It is a court system that has abandoned justice. It is a Congress that does not legislate, but instead permits lobbyists and corporations to write legislation. It is a press, desperate for advertising dollars and often owned by large corporations, they does not practice journalism. It is academics, commentators and public intellectuals who function as shameless cheerleaders for the neoliberal and imperial establishment, and mock the concept of independent and critical thought.❞ ——Chris Hedges

Have to say, it does say much about communities of color from every angle: The residents and the elected officials. There is a little something called "Personal Responsibility".

The main thing, who put all the garbage there, certainly not fairies.

So let's call out why communities like Jamaica look they way they look, IT'S THE PEOPLE. But also nothing is being done about this either. I mean 12 years, REALLY.

Oh no. The same thing is going on all over the country.

To put it in perspective:

Oh no. The same thing is going on all over the country.

To put it in perspective:
https://www.youtube.com/watch?v=Z3wMj24GjtA&feature=youtu.be

Please don't try to justify, by saying it is all over the country. Yes, our country has turned a bad corner, but the Jamaica thing has been going on way before the country turned a really bad corner.

For the ANON who stated the failure of Black Leadership (and how failed that black leadership is), you left out Ruben Wills (isn't he in jail on corruption charges) and Malcolm Smith (also in jail), Archie Springer and every single black church leader in that area. Can't blame you for leaving them out, because there are so many exploitative black leaders in the history of that area. You mean obese Comrie isn't dead of the Covid virus.

Speaking of that Floyd Flake, his senior housing Center On Merrick Blvd was the site of an underage teen being pimped out on the premises. AND he got a street named after him:

"Now, if I left any of the failed, Black-sploitation leaders' names out, forgive my addled mind (their politically failed records read like a police blotter)."

Thank you for naming names. More people should remember and be aware of stuff like this.

Please don't try to justify, by saying it is all over the country

Not even close. Why would anyone justify the wanton destruction and gaslighting of the people in these neighborhoods?

Yes, is all over the country.

These failed black "leaders" would rather spend more time looking for imaginary white supremacists while doing the bidding of Black Criminal Lives Matters than doing their damned jobs in improving their neighborhoods. Vote the useless bums out already! Or has six decades on the "Democrat" plantation turned people's minds to mush?

This is how they choose to live. I think I’m going to go look at the 1940 tax photo to see how nice that house was before they got there

Gee Nancy, you seem to be unhinged. Maybe too much vino?

You really care about your constituents, BLM huh?

You need to retire to one of the nursing homes ran by Andy's pals.

Interestingly placed dormer on the house to the right, no? An architecture oddity. Looks more like a sentry box. Any takes on what's going on there structurally?

I doubt very much that that attic is allowable living space ...and all attics need Fedders, right?

They lined up a whole row of houses zoned R4 ... something amiss here ??

Up against Judge Amy Barrett "ACB" you can see just how classless Harris is.


Kamala calls everyone a racist except Joe Biden .. oh wait .. she did .. she did!

The Democrats founded the kkk. Any questions Common Core lunatics?

Fact check: Democratic Party did not found the KKK, did not start the Civil War

Keep in mind that the republican and democratic party had an ideological swap after the Civil War, so the democrats of that era would be republicans now, and vice versa.

The trolls mentioning "democrats did horrible things two centuries ago" always forget to mention that.

What a joke. She used to lock up our fellow black Americans (man, I hate this term) for fun and profit when she was San Fran's DA.

Some piece of work.