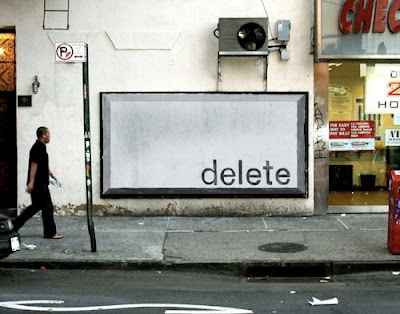 A team of vigilante vandals whitewashed more than 100 street-level billboards last weekend so artists could use them as blank canvases.

These billboards are illegal under city law, said Jordan Seiler, of the Public Ad Campaign, "So we wanted to use them for public communication instead of public consumption."

City officials would not confirm, whether the billboards, all owned by NPA Wildposting, are illegal.

But the artists' creations -- including turning one billboard into a giant "delete" key -- were quickly replaced with more mundane ads for iPods and upcoming concerts.

"We had lots of tourists watching the artists work," he said. "I think of this as a vigilante cultural event."

Photo from Urban Prankster
Posted by Queens Crapper at 12:17 AM

It can be very dangerous to be a self-appointed lawyer. Many times you don't know what is illegal.

One of my neighbors owned a 100 year old home with several exotic variances. Neighbors were constantly parking in her "illegal" driveway and being towed away.

Even worse, their actions in blocking the driveway could have resulted in a delay in taking a sick, elderly woman to the hospital.
If someone died, they would be facing more than a traffic fine, maybe civil court or uncivil revenge.

These artists should desist before someone confronts them with a bat.

In a country where torture is acceptable practice, we think nothing of beating our artists.

The beating will occur with Irate private property owners when "artists" step out of line.

What makes you an "artist?" anyway. If you really deserved the name, you would not have to run through the streets of the city scrawling crap where it is not wanted. People would pay for your work.

Actually, according to the president, touture ISN'T acceptable in this country.

Interesting. But it's okay to beat artists, right?

If I find your canvas, walk up to it and spray paint it, will you beat me? Perhaps shoving your own aesthetic down another person's throat is not the way to go.

If I love bagpipes and listen to them morning, noon, and night, does that mean its okay when you are forced to as well?

Whether it is an alleged "artist" destroying another's property, a loud music player pumping up the volume in the wee hours of the morning or an obnoxious smoker blowing smoke directly into your face, I find it's the most aggressive people who are most aggrieved when others take a page from their book.

Maybe you are not an "artist" but a fascist.

I'm not an artist at all, and never claimed to be.

But I wonder why the typical response to "artists" here it to question their manhood and/or pound chests and threaten physical violence. Why are you all so insecure?

Because the "artists" are taking over someone else's space and that is just plain obnoxious. I don't believe artists or anyone else should be attacked, but it will happen if they intrude where they are not wanted.

They are very similar to the anti-fur activists who decide because they don't believe in fur, they should cover you and your clothing in blood.

A minimally-brain damaged friend of my sister's was gifted by the attentions of such a group and was terrified.

The fur that her parents gave the apple of their eye daughter was ruined and a handicapped woman who will never understand their political agenda was victimized.

The net result will be the purchase of a new, replacement fur and the polarization of everyone who knows the story against PETA. How does that reduce fur sales?

What is just plain obnoxious are in your face advertisments that you cannot escape wherever you turn.

Thus an "artist" turning a pollution billboard into something that is more pleasing or at least recipricol in nature, then that is fair game.

All billboards are pollution regardless of who created them.

Then let the police do their jobs and fine them. What is attractive about self-righteous vigilantes?

so they painted over billboards that were illegal in the first place?
I bet if the article was about the illegal billboards, everyone would be commenting about the greedy owners trying to make a quick buck.