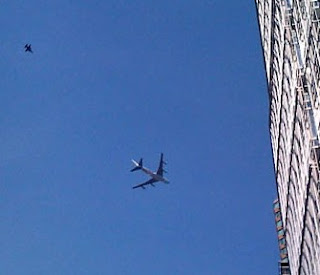 New York City Mayor Michael Bloomberg says he is furious that the federal government flew a presidential Boeing 747 and a fighter jet near ground zero. The incident on Monday caused a brief panic among workers, who said they were not notified in advance.

Bloomberg says the flyover so near the World Trade Center site showed ''poor judgment'' and was insensitive. He says he is furious that the NYPD and another city agency were notified last week, but did not tell him.

If he had known, Bloomberg says he would have tried to stop it.

Is this guy trying to throw his police department under the bus to save face? What happened to his "get over it" attitude?
Posted by Queens Crapper at 3:21 PM

I work downtown and didn't even know this happened.

Just proves that Bloomturd is just plane wrong for NYC!

He's mad because he still believes that the presidential plane is really his. He took it by eminence domain!

That 30 year old 747 should have dropped a engine or tire on his townhouse.

Werent the "out of its" that screwEd up appointed by him ?

Even if it transponder was off. How can a 747 veer so far off flight lanes and not be detected till reaching Manhatten ?

Suspect that some folks were taking a joy ride in AF1

The mayor must go. The military does not tell ANYONE The destination of AF-1 or other similar vehicles.He really is out of control,or he must think he is more imprtant than the Predisident!!!!!!!!

I was watching the Today Show this morning and on their local newsbreak shown every half hour, they warned about this photo op telling people not to panic if they saw it and even invited people to email any photos, so it seems that at least one network knew this was going to happen.

Aren’t there over ten 747 AF-1's and a brand spanking new One?
Aren’t they designated a "code" name for AF-1 only when the president is actually on board.

It sounds like a joy ride to me. Perhaps Ted Kennedy needed his next drink.

I know for a fact Bush let Ted Nugent & son Rocco get some kicks and see some stuff aboard AF1 in Texas about 3 or 4 years ago.
Nuge himself bragged about it

omg great reaction from bloomass, he was upset who cares! how did he respond? if this was an actual attack on nyc he just failed. I feel sorry for the folks who were looking out the windows and saw this shit going on, i think i would of had a heart attack.

What is wrong with moron Obama's judgment that he thinks he can allow ANY plane to fly over downtown like that?

He was unaware that the plane would be used this way? Then that's even more proof that he just a moron puppet on strings held by others.

This is his miserable indifference showing. He hasn't got a clue what those terrorists did to us that day.

So, now he wants to be their friend.

Perhaps you are the one who is clueless? Your prejudice is hanging out for all to see.

Anonymous said...
Perhaps you are the one who is clueless? Your prejudice is hanging out for all to see.

Perhaps that last anonymous would like to explain how the political observation that Obama is clueless is "prejudice is hanging out for all to see."

Is Obama to be blindly adored?

I support Obama, but this idea was marinated in stupidity. No one in his administration could imagine the flashbacks that this would bring to anyone who saw a plane crater into a building 8 years ago?

The more I read about this the more I become convinced it was for a photo op; a photo op for th epeople who were getting a rid on AF1.
Somebody was being given a joy ride on AF1 and part of it was a flight around the Statue of Liberty and lower Manhattan. Very cool for the joy riders.
I want to see a list of people on board that aircraft.
Can you imagine if this had happened on W's watch.

Bloomberg sees himself as an emperor anointed by God a position much higher than the President and Commander in Chief of the United States of America!

It's Mike's feeble attempt at grabbing some publicity for his faltering political campaign.

We don't need 4 more years of this pompous whining brat!

If "clueless" is the best comment you can offer regarding President Obama then you could use a little brain boost!

Try going back to school!

With the possible exception of the people who work at the Pentagon, I don’t think people outside the NY Metropolitan area get it. The sight of panicked people evacuating buildings and flooding into the streets is lost on someone who has no personal connection to the events of 911.
The stupidity and base arrogance of our government agencies is just mind-boggling. What else will you keep from us under the guise of State Secrets? The disconnect between Federal and local governments is disturbing and downright dangerous. You, the people who have sworn to protect us have failed miserably. You are not worthy of the respect of the American people.

Military jets scramble low over NYC
every Memorial Day and on other occasions.

Nobody runs for cover and hides under the bed.

I'd be much more afraid of a building collapse due to DOB's negligence or a construction crane accident.

Bloomberg is just milking this incident for his own gain...
that whining little pansy!

Yeah...he didn't have the brains or moxie himself to become president of the USA so he's just generally pissed that Obama
didn't kiss his ring first.

Mike...you're just the mayor.
And not a very good one at that!

The president outranks you!

Bum-turd's money has made him senile. He's clearly out of touch.

Exactly !
From the position of the F-14s trailing they had no perspectives to shoot good photos.

Joyride or some kind of black operation.

With the age of Photoshop and computers why would they go through so much trouble only to photograph a 747 from behind ?
The sky wasnt even clear at 10 AM.
We are being told bullshit it was a joyride !!

How you all try to blame Bloomberg for this is ridiculous. Can any of you try to keep discussion above 5th-grade level?

Anonymous said:
"Get over it.

Military jets scramble low over NYC
every Memorial Day and on other occasions.

Nobody runs for cover and hides under the bed."

Get the facts: It was a 747 that was flying so low that reminded everyone who saw it of the morning of 9/11.

It was the Obamoron who authorized this dangerous flyover because he has no connection to the horrors of that day. He didn't care then, and he doesn't care now.

In his breathtakingly stupid arrogance he allowed this just so a picture could be taken.

Is this what he thinks the Air Force mission is? Taking photos while reminding people of the tragedy? How many of the 9/11 victims' relatives were traumatized by Obamoron's arrogant behavior?

I'm pretty sure he knew about it. He's just covering his ass so this whole situation doesn't blow up in his face.

I voted for Obama, which doesn't mean I have to be up his ass and agree with every single thing he does. This was a stupid photo op initiated by his White House. Why is it that anytime someone disagrees with an action by his office, they are called prejudiced? By the way, couldn't they have done this on a Sunday when people weren't at work?

Bloomberg is definitely losing it.

Too much money has given him gout of the gray cells!

Yeah...dummy...I know the difference between a military jet and a 747.

My brother in law flew F-16s in the U.S. Air Force and my neighbor is a pilot for American Airlines!

Bloomberg is just grabbing a cheap publicity op and you're just a pussy scared of the noise that your own urine stream produces.

Have your mommy give you a "ba ba" to take to bed with you!

" ... you're just a pussy scared of the noise that your own urine stream produces.

Have your mommy give you a "ba ba" to take to bed with you!"

What depravity! What callous indifference to those who suffered on 9/11!

"It was soaring over Lower Manhattan, Staten Island and Jersey City so government photographers could take pictures near the Statue of Liberty for publicity purposes" - NY Times (4/28)

Publicity for what purposes? For whom? Who were these photographers? What branch of "government" were they working for?

"Other images of the plane, taken at picturesque sites like Mount Rushmore are sold as souvenirs and used as promotional material."

Sold as souvenirs? Where? To whom?
Where does the $ go? Promotional material for the aircraft manufacturer or POTUS?

Who pays for the plane's gas?

Give that man a cigar.
He broke the Coney Island arcade record for the most downed enemy planes.

Too bad he isn't as earnest in protecting NYC from massive over development by his overly wealthy developer pals!

They've been the ones responsible for most of those much more dangerous "construction accidents" that occur on a regular basis throughout our city!

NYC needs a real mayor not one who toys at it like a rich man's hobby!

Bamboozled by Bloomberg for 8 years!

We don't need another 4 of him!

You're brain dead fella if you can't recognize Bloomberg is pulling a cheap publicity op for himself!

It's Emperor Bloomberg who's showing
the callous indifference to those who suffered during the 9/11 attack by employing this stunt to elude idiots like yourself into believing he cares about the "average Joe" in NYC.

P.S. jerk-off...
I lost friends at the WTC while Mike was, no doubt, spreading some more caviar on his morning toast
and inquiring whether that would affect him financially!

Bloomberg is a cold gutted shark with a spread sheet in place of a heart!

Rid NYC of its chief predator.

Bounce him at the polls!

The US citizen pays for EVERYTHING "George" since the days of that other famous "George"...Washington"...
the father of our future Internal Revenue Service!

All of this WTC/9-11 stuff is beginning to stick in my craw because it has become a regular nasty cottage industry.

AND THAT'S THE SUPREME INSULT TO ALL THOSE WHO SUFFERED ON THAT FATEFUL DAY !!!

Anonymous said:
"All of this WTC/9-11 stuff is beginning to stick in my craw because it has become a regular nasty cottage industry.

AND THAT'S THE SUPREME INSULT TO ALL THOSE WHO SUFFERED ON THAT FATEFUL DAY !!!"

An insult instigated by Obamoron and his craving for publicity.

When the memories are deliberately stirred, and then obscenely pulling the healing scab by depraved remarks by a "cottage industry" hater, then retribution will follow.

By God (heh, heh)...I think that we might actually have G. Walker Bush
(or one of his lame-brained disciples) posting here !

Could that really be?

Get over it George (or whomever)...Obama won!

You obviously represent the bitter minority belching out your anti Obama tidbits between beers!

Fella...you'd better go and take a piss to match the shit you've been slinging. (Yawn)!