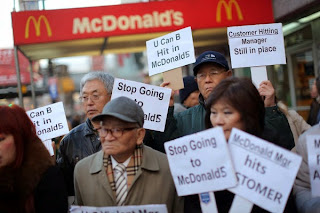 A manager at a Jamaica Burger King hurled a napkin dispenser at a group of rowdy teens but hit a man ordering food instead, chipping his teeth, according to police and court records.

The incident took place on Nov. 6 around 11:30 p.m., when the 26-year-old victim was buying food at Burger King on Jamaica Avenue, near 160th Street, police said.

At the time, “a group of kids” was “throwing items around the restaurant,” according to the criminal complaint.

The manager, Nancy Fields, 27, of Richmond Hill, threw a napkin dispenser into the crowd but it hit the man instead. He suffered two chipped teeth and severe pain, according to court documents.

Fields was arrested on Dec. 5 and charged with assault and harassment. She is due back in court on February 3.

Several Korean-American groups on Tuesday called for the boycott of a McDonald’s restaurant in Queens where a Korean patron was struck this year by an employee wielding a broomstick.

At a rally in front of the restaurant, the groups’ leaders demanded that the restaurant and its parent corporation improve their employees’ ethnic sensitivity training and customer service.

It is the second time this year that Korean community groups have mobilized protests against a McDonald’s restaurant in Flushing, a neighborhood in Queens heavily populated by immigrants from East Asia.

In January, community leaders called for a boycott against a McDonald’s franchise on Northern Boulevard after managers called the police on several occasions to remove older Korean men and women who had turned the restaurant into a de facto clubhouse, hanging out for hours and ordering only cups of coffee. That dispute was resolved when a local official helped broker a détente between the owner and the patrons.

The new protest stems from a 10-month-old confrontation that is the subject of pending civil and criminal cases.

The patron, James Jin Kim, 62, claimed that the employee attacked him on Feb. 16 after he complained about the slow pace of service at the restaurant, a McDonald’s franchise on Main Street, a busy thoroughfare in the commercial heart of Flushing.

According to a lawsuit filed in April in State Supreme Court in Queens, Mr. Kim claimed that after waiting in line for 10 minutes to order a cup of coffee, he complained to the cashier. “Too much time,” he said, according to the lawsuit.

In response, Mr. Kim said, an employee behind the counter retorted, “We don’t serve coffee to people like you,” and added, “Get out of my restaurant!”

According to the complaint, Mr. Kim then took out his phone and recorded a video. The employee, Rooshi Sajjad, walked around the counter, grabbed a broomstick and struck Mr. Kim’s hand, “barely missing his head and eyes,” the lawsuit said.

And in Bayside fast food news, the Bell Blvd McDonald's location has closed.
Posted by Queens Crapper at 12:05 AM

The funny thing is the people in the picture holding those signs probably don't have the slightest clue what they say.

Jamaica...what do you expect civilized behavior?

Of course, all these incidents show bad behavior on the part of the customers, but I am not sure to what extent that provocation is going to be an effective defense.

The remedy is, of course, to close and cut your losses.

Another nail salon or laundromat perhaps in both locations.

Immigrants come here to exercise their rights!
The right to wait on line, the right to take up space in a restaurant while not purchasing anything, the right not to learn the language, the right to sponge off the taxpayers, the right to yearn for their home and the right to complain about everything they came here for.

A racial conflict that doesn't appear to involve a white guy.

Thus, the owners of the "megaphone" - The NY Times - will simply keep this story in the "local pages".

Of course, all these incidents show bad behavior on the part of the customers, but I am not sure to what extent that provocation is going to be an effective defense.

Maybe you read a different article, but it did not sound like the Korean man in Flushing provoked anybody with bad behavior - he complained about the long wait and the cashier hurled insults at him. And then when he tried to take a photo of the person who he felt mistreated him, the person hit him with a broom. Sounds more like bad behavior from the McDonald's employee than the customer.

hmmmm - I wonder what race the people with the "bad behavior" are . . .

"Bad behavior" is throwing stuff around and turning a restaurant into a clubhouse. Both, I doubt, are not covered in the Franchise Handbook.

Either you accept it and lose the business of people who fear disruptive teens and the people who can't find a place to sit because all the seats are occupied by squatters.

Like I wrote above, if these are people who are walking through your front door, it's time to close and cut your losses.

"Sounds more like bad behavior from the McDonald's employee than the customer."

These people are organized, if they can't buy it they will force you out of business, coming soon a new nail salon or massage rub and tug.

white guy gets assaulted: man, sucks for that guy.

asian guy gets assaulted: round up the troops and schedule the press conference!!!

Why make this incident about race, Crappers?