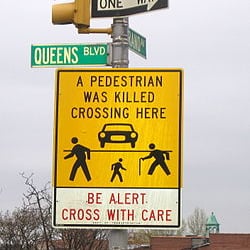 The DOT tweeted that Commissioner Polly “Trottenberg anticipates reducing the speed limit to 25 mph by the end of the year.”

Queens Boulevard was not included as part of the 25 mph city wide speed limit that went into effect Nov. 7 since it was deemed a big street designed to accommodate faster speeds.
Posted by Queens Crapper at 12:30 AM

Ridiculous. The speed limit should be raised on this highway. It's already unnaturally slow.

We have to change everything for a few morons wwho can't cross a street. I prefer the Sock way, the good oof the many outweigh the needs of the few.

I must have witnessed a 100 vehicles easily speeding along QB at over 40 mph yesterday. Not one police car in sight! This law and the cost of new speed limit signs will be a waste of tax dollars. Reconfigure QB . That's the answer .

Anon #1, people live, shop, walk, and in some cases die along this "highway".
Anon #2, you're wrong, we need to change everything for a few morons who can't keep control of their vehicles or drive at speeds appropriate for conditions. There's plenty of dummies driving into storefronts and hitting people on sidewalks or while they are crossing with the light; THAT'S the real problem. Then there's the number of people with their heads buried in their phone while they are driving. They are selfish assholes who care more about their own texting than the safety of anyone around them.
And yes, there are a few dummies who can't cross the street, but the problem is much greater than that.

Anon #4, why can't we just enforce the rules against the idiot drivers? Boulevards and Parkways are the few places designed to accommodate higher speeds and faster travel. Clearly, people shouldn't be driving and texting or driving recklessly, but they should stop at lights, etc. Lowering the speed limit here is just lazy, and I say this as someone who frequently drives and walks in this area.

all the deaths on QB have been from people crossing against the signal or outside the crosswalks. someone needs to start a petition to get rid of this idiotic law.

You can make the speed limit 10 and it still wont change the reason for the accidents. Pedestrians jaywalking. Why this is not being enforced on a road like this is absurd.

This is done to make busy work at the DOT. Just enforce the current speed limit.

Shall we live in the real world?

How can I prove that's the case? Go to any busy street in Queens and watch it for an hour. Count how many pedestrians are crossing mid block, or are crossing when the pedestrian signal says don't cross. Then watch how many cars blow through a red light or commit a moving infraction.

Every time you will have more pedestrians acting in a stupid and hazardous manner than drivers who are doing something stupid.

Also count how many times the drivers saved a pedestrian's life by slamming on the brakes as the pedestrian jaywalks across the street in front of them not paying any attention.

Anon 4 the highway was there first. It's why all those people live there. Look at when all those communities were founded. It's like the idiots who move near an airport then whine about the planes.

This is a waste of time if Albany doesn't let the city put up cameras where it wants with a lower buffer.

This new speed is stupid and a joke. NYC is becoming a city for dummies. We can't drink a big soda or eat fatty foods. And now this, I am sick of NYC and will be moving on to another state. Everyone is laughing at us. Small towns do not have such speed limits. I agree most accidents happen because people are not crossing at the light. What comes next is high car insurance rates because people will be given speeding tickets. I can't barely afford the high insurance rates right now.

Less than a quarter of pedestrian ksi crashes involved a.jay walking ped. Crossing at a light with the light and crossing at marked or unmarked crosswalks without lights are the majority of deaths and serious injury crashes. I.e. criminal driver killed someone. I'm glad you're leaving anon. One less reckless driver on the road.

Anon No. 10 - also count how many times drivers act like they're on a drag strip or ignore other traffic laws. Guaranteed there are more irresponsible drivers than pedestrians. Pedestrians go at two or three miles an hour. Drivers are going a lot faster than that, operating vehicles that weigh a few thousand pounds. Whow is more of a menace?

Drivers keep flying through red lights and drivers make left and right turns at insane speeds during the times pedestrians have right of way.

Very glad DOT is doing this. It is not a highway. This is very much a local street with tens of thousands of people living right on it, supermarkets, parks, playgrounds, houses of worship, local shops. Take the LIE if you need to go fast, or better yet, get out of your car and take the train. They need to redesign the whole Boulevard and add bus lanes, wider medians, bike lanes and pedestrian space. Its current allocation of space is ridiculous and costs lives.

Thats the problem with zero tolerance and "Vision Zero"s... they deal in absolutes and enough is never enough.

There are plenty of videos out on the internet of people getting killed by cars going 10mph. you are never going to get to "zero"

Anon no. 19: So what's the alternative? Not to do anything? Do you have a better idea?