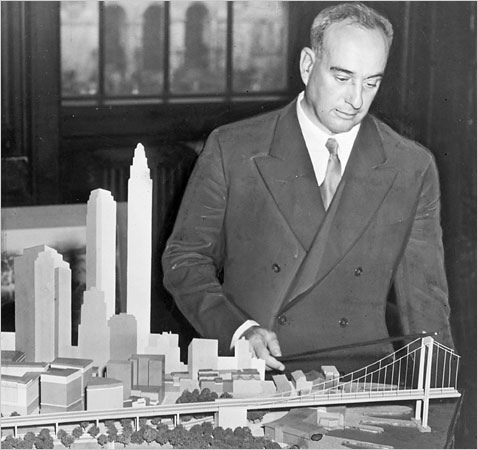 It's really no surprise that because of the way things are going, that there is a push by some Columbia University prefessors to rehabilitate the image of Robert Moses. While the man did do admirable things, he also destroyed neighborhoods. The Long Island Expressway cut communities in half only to make them 24 hour parking lots.

A Town Revived, a Villain Redeemed

...the pendulum may have swung too far; we may have become too timid, too frightened of attempting any large public works. Consider Westway, or the rail freight tunnel, or various garbage-incinerating plants, or the Gehry Guggenheim design for West Houston Street, all worthy ideas shot down by neighborhood opposition.

There are several large large public works that the majority of people seem to be accepting. A new passenger rail tunnel between Jersey and Manhattan, the 2nd Avenue subway, extension of the 7 line, new stadiums for the Mets and Yankees.

Are we supposed to accept every project? Maybe the people themselves really are the ones who know what's best and should have the most say over what is put in their backyards. When people blindly accept everything the government tells them is good for them without questioning it, you get a situation similar to the one found in Germany in the 1930s.

Photo from the NY Times.
Posted by Queens Crapper at 7:00 AM

I don't think that creationists will get very far in today's world.

I don't think brutal planning as exemplified by Moses will get very far in today's world.

In both situations, the forces of progress and logic became complacent and did not stamp out the last embers of these examples of backward thinking.

Like the preservation community in today's New York, the old order did not finish the task. They dropped the ball.

Now they should either lead or follow, but above all, just get out of the way.

Well, isn't it Columbia University who produces many of those ego-maniacal architects that have to hang their ugly works on the clothesline of our city? Ever listen to a talk given by that smiling faced egotist Robert A. M. Stern? What an overconfident windbag who thinks he knows it all? Gehry's architecture is more like sculpture that's better suited to open spaces and warm dry climates. Too many joints and seams and materials which won't wear well in a temperate climate. I'd hate to own one of his buildings. The maintenance will eat up your $$$$$$$$ in the long run. Although I do like his designs.

If Moses had his way, a huge ugly expressway would have swept across Manhattan, gutting Greenwich Village. Instead of the Brooklyn-Battery Tunnel, a gigantic bridge would have destroyed Battery Park. All Moses seemed to care about was moving cars from place to place. He showed the danger of giving one man too much power (hello George W. Bush).

Never mind the LIE. The Cross Bronx Expwy. was a horror show! Some holdouts in an "eminent domain " apartment house in the way of this project refused to move. You know what Moses did? He started tearing down the building from the roof down, forcing those tenants who lived on the lower floors, to move. He was a heartless thug! Bloomberg would love to have Moses working alongside him today. Mayor Mike, himself, is an example of evil in a smugly quiet and banal form!