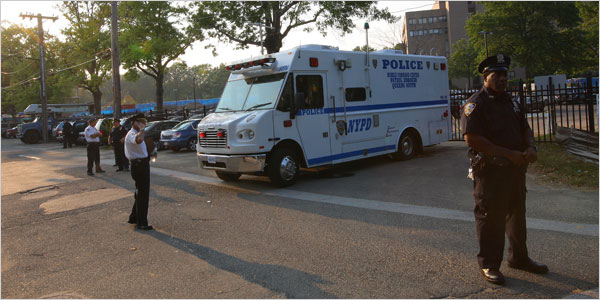 Omesh Hiraman, 22, was found incompetent to stand trial by Judge Joseph Zayas following a psychiatric report released at Queens Criminal Court. It was determined that Mr. Hiraman would not be capable of understanding the case against him, the district attorney's office said. The court turned Mr. Hiraman over to the New York State Commissioner of Mental Health for a 90-day mental evaluation, the office said.

Since Mr. Hiraman was found mentally incapable to stand trial, the charges against him have been dropped, the office said.
Posted by Queens Crapper at 12:54 AM

would be a good topic for that "Stupid NYC" blog.

One thing the MSM never brings up on this one - the reason the guy only had one bullet? It was a MUZZLELOADER - you know, like the way they did it in the real old days. YES, it was a modern version (from the photos a Knight in-line), but

---Too many unchecked nuts entering this country.
The 911 terrorists learned to fly planes here

United States Bordello ! as my grandfather would say

How could they find him incompetent to stand trial when he competently researched, and then purchased, a weapon?