Regarding the lack of debate in Sunnyside Gardens over the Special Planned Community Preservation District now in place and the push by a small group to landmark the district.Many of us who found out about landmarking at the first government meeting on Nov. 29 thought we were in the middle of researching, discussing and finding answers about how best to preserve the neighborhood. Instead, our voices were cut off when the Landmarks Preservation Commission decided to listen to outsiders who are preservation experts in other neighborhoods, and to a small group of residents spreading fears of overdevelopment, and to calendar Sunnyside Gardens on March 6 while we were in the middle of this process.

Many homeowners and renters are still just learning about the complex issues at hand. Homeowners in the Bengali community have literally been shut out of the process and only came to a public meeting on Feb. 27 because a few of us reached out to them. After three months of research and meetings with two people from City Planning, with four people from the Landmarks Preservation Commission, with two lawyers, three preservationists and six urban planners, it is my deep belief that we would be better protected from overdevelopment with an adjustment to the current PC District regulation, and we would be better able to exist as a community of people, not just houses and buildings, by having continued open dialogues and debates.

I asked the commission, the City Council and the community board for translation of announcements back in December for homeowners who are not proficient in English. This request acknowledges that in Queens, we are in the most diverse locality in the United States, and that while I know many immigrants who speak several languages including English, there are also homeowners who are not proficient in English. Several of us have experience and expertise in reaching out to non-English speakers and in how to organize simultaneous translation. Our requests have fallen on deaf ears at the commission, our community board and our City Council.

We are calling for Landmarks to stop this process and for the community to have an open public debate on the detailed and complex issues of zoning and regulation. We have an alternative proposal and we would like to present it in an effort to not only address issues in Sunnyside Gardens but to begin a discussion about the greater Sunnyside community. 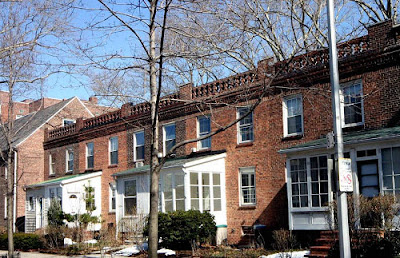 As a resident of Sunnyside Gardens for over 11 years and a homeowner here for eight and a half years, I have come to love and greatly appreciate the unique character and ambiance of the neighborhood. It offers a quality of life and a sense of place that is rare in New York City and is something I would not ever want to see disappear.

Unfortunately, during the years I have been fortunate to live here, I have seen changes take place to many of the homes and more important, to the gardens that are not respectful of the character of the neighborhood. Extensions that are out of scale and do not match the design of the homes, along with numerous driveways and parking spaces that have been added, despite the fact that they are not allowed under current guidelines for the neighborhood. If these changes continue, Sunnyside Gardens will be gardens in name only.

While the gardens are a Special Preservation District, anyone who takes the time to stroll through the entire neighborhood will see countless examples of changes that violate, not only the spirit, but also the letter of the law of the district. It is for this reason I support wholeheartedly the designation of Sunnyside Gardens as a Landmark District.

Such a designation will offer many benefits. One of the most important and one that will greatly reduce the number of violations, is the fact that new and prospective residents will know that the has been designated a landmark neighborhood. Currently, many who buy homes here are not made aware of the rules that exist within the Preservation District. This has resulted in many of the problems we face today, and in many unpleasant situations where owners have made a change or started to, only to find out after the fact that what they have done is not allowed.

While some fear the intrusion of a government agency into the process, the rules that will be put in place — with community input I should add — will be far clearer and the process for getting approval for any desired changes, far easier and much faster than is currently the case.

Photo from AM NY.
Posted by Queens Crapper at 1:05 AM

Good God those politicians are running scared. What would happen to a corner of Queens where people can actually breath without tweedism.

This is Mickeljohn and the clubhouse all over again.

Please note, no one has actually contacted people that live in a landmark district.

We are getting a certain degree of satisfaction from this though. All those wasted years when the Manhattan clique that ran the preservation movement never bothered to lift a finger to encourage or support the grass roots out here can come back to haunt them.

For you see, these antilandmarking foes are clumsily hitting around the one point that seems more and more likely to eventually overturn the landmarks law: a general consensus is gradually being established (even by its strong supporters out here in the hinterlands) that it is not being applied equally around the city.

Slowly a case is being built up that is discriminates against people without connections or pull.

It's usually the people (like Miekeljohn & Co.) with the loudest mouths that have the weakest arguments.

Hate to bust your bubble Susan, but it'll be up to the LPC.

You can bus in all the hordes of people you like but whether SSG gets landmarked will rest solely on its architectural and historic merits!

Continue bellowing as loud as you like until you all get sore throats!

"whether SSG gets landmarked will rest solely on its architectural and historic merits!"

what rock have your been hiding under?

Well, then nothing stops YOU from being "political"! Start organizing for busloads of pro SSG landmarking supporters to flood the LPC hearing! And stop complaining!


Do you need a map (geographical, political, or strategical) ?